The role of Apache BookKeeper in Apache Pulsar - part 1

After recent introduction to Apache ZooKeeper in Apache Pulsar, it's time to see another component of this messaging system, namely Apache BookKeeper. In this first post of the series, I will introduce the key concepts of BookKeeper and also try to see how they're implemented.

If you take a look at the BookKeeper's documentation, you will see its main building blocks, namely entry, ledger and bookie. If you are familiar with Apache Kafka's logs and segments, all these concepts should look familiar to you. First of them, an entry, is the representation of a particular record written by the client to an append-only structure called ledger. This append-only structure is stored by a node called bookie. 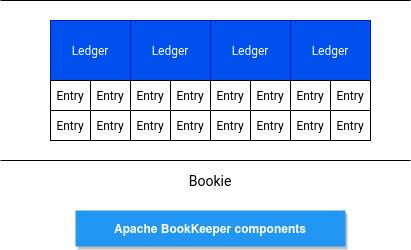 That's a quite high-level view. Let's deep delve into some details not and analyze the class representing our bookie.

The bookie server is represented by org.apache.bookkeeper.bookie.Bookie and by analyzing its fields, you will see there is much more than ledgers. The first important extra feature is a journal which, as you can see in the method below, is associated to every ledger:

Journal is a transaction log where all transactions describing every update, are first written:

It doesn't mean that one ledger stores its entries in one journal though. As you can see in the getJournal method, the journal is computed as a modulo of ledger id divided by the number of journals. And this number of journals comes from the configuration entry called journalDirectories:

Journal doesn't write the entries directly to the files. Instead, it buffers them in an in-memory queue and only later persists them inside an asynchronous thread into a journal file. Every file will have approximately the size defined in this configuration property: journalMaxSizeMB:

Initially, I thought that the journal is the synonym of Apache Kafka's log structure and the journal files are the log segments. But in fact, it's not really true because the data read by the clients is stored on ledgers. And how does it happen? Do you remember Bookie's addEntryInternal method? At the beginning it retrieves the ledger id and just after that, it adds the entry to the ledger storage:

The storage implementation is defined in ledgerStorageClass property (one of: DbLedgerStorage, SortedLedgerStorage or InterleavedLedgerStorage). The simple high-level picture from the beginning, will now look like that: 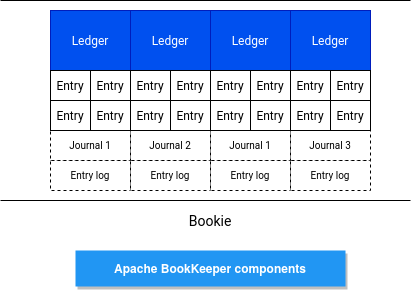 But, is there a difference between journal and entry log? After all, it would be much easier to keep only one storage. It could be, but there are some differences. Journal contains all entries written in one or multiple ledgers whereas entry log exists at ledger's level:

In consequence, the journal below would have 3 different ledger storages: 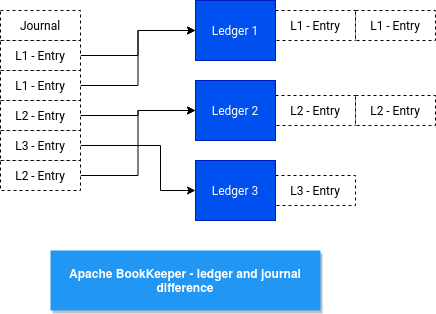 To be honest with you, I made several mistakes during the exploration. First, I thought that the journal logs are synchronized with ledgers only when the journal thread terminates. But this synchronization, in the code represented by the concept of "replaying the logs", happens when the bookie starts. Even though everything is not clear for me at this stage, I'll move forward and check how BookKeeper integrates with Pulsar in the next post of the series, trying to find some extra answers.

Read also about The role of Apache BookKeeper in Apache Pulsar - part 1 here:

After the focus on the ZooKeeper's role in #ApachePulsar, it's time analyze the BookKeeper's role ⏱️ The first part blog post is online ? https://t.co/NVaoKrjq7t