I presented in my previous posts how to use a file sink in Structured Streaming. I focused there on the internal execution and its use in the context of data reprocessing. In this post I will address a few of the previously described points.

In this post I will first present the problem that, depending on your trade-offs, may not be necessarily a problem. Later on, I will propose 2 possible solutions. The first one handles it without altering Apache Spark codebase whereas the second one introduces a small change in the compression part.

The problem with the current implementation, or rather not a problem but the trade-off that you have to make, is to decide whether you allow some latency in retrieving small metadata files or not. If you do and can, for instance, set the number of not compacted files to a very big number satisfying your reprocessing needs, you don't need to worry. But what if you don't want to keep a lot of small files?

The first idea that comes to my mind is to use a backup pipeline that will copy the files to another, long-term storage not monitored by Apache Spark and use them for the reprocessing if needed. The whole idea is represented in the following schema: 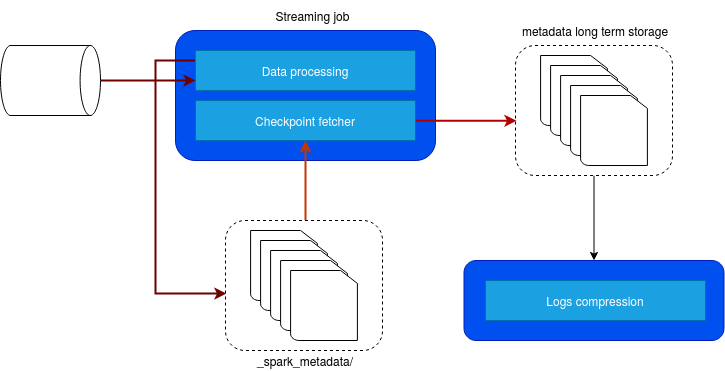 So, the code is running in the background, on the driver. I used that approach for the demo simplicity but it could also be a Dockerized container managed by Kubernetes, deployed at the same time as the streaming job.

A nice thing is that you can do whatever you want with these "backup" files. You can store them in a compressed format or put them into another storage to not penalize Apache Spark with too many small metadata files. On the other hand, this approach has also some drawbacks:

Overall, that's a lot of things to do. That's why there is another solution that requires some changes in Apache Spark codebase.

What's the problem? Let's imagine that I want to reprocess the data from the micro-batch 101. I invalidated all checkpoint location files to restart my processing from the correct Apache Kafka offset. But some files between 101 and the last micro-batch version (let's say 300) were compressed to the files number 100, 150, 200, 250, and 300, and at the same time, the not compressed ones were deleted. I have then no way to know what files between 100 and 150 I have to clean up before restarting my pipeline. Even though I would like to start from 100, I don't know what files were created by the batch 100. Normally that should be the files from the first X lines but it's rather a conventional approach.

To address this issue, we could refactor the CompactibleFileStreamLog#compact method and add the batch number for every line that way:

Now, to clean up the resources, we could have something like:

A nice thing about the change is that it doesn't involve any extra cost of fetching the data. The single drawback is the few extra bytes written by the JSON schema but it can be the trade-off to accept to keep the granularity. It's only a proposal, I've never experienced it in real life but maybe it can be used as a discussion base to make our pipelines more resilient and easily replayable.

The last post about #ApacheSpark #StructuredStreaming file sink is online. This time I proposed a prototype to enhance the format and persist batch number alongside the written files https://t.co/BvLZKpsGba