One of previous posts presented partitioning strategies. Among described techniques we could find hashing partitioning based on the number of servers. The drawback of this method was the lack of flexibility. With the add of new server we have to remap all data. Fortunately an alternative to this "primitive" hashing exists and it's called consistent hashing.

One of partitioning strategies is modulo-based partitioning. The data partition is computed from a simple formula of hash(object) % numberOfNodes. It performs pretty well when the numberOfNodes doesn't change. When it's variable, the big problems of modulo-based partitioning appear. Among others, with every change in the cluster (added or removed node) the hash of all elements must be recomputed and these elements must be moved to new locations. In the context of heavy load, it can be very consuming operation.

To cope with this issue a lot of work was done and one of approved solutions was consistent hashing. It represents the data in the form of a circle where each node is represented by a point. By doing so, each node is responsible for the data between it and its predecessor, as illustrated in the following image: 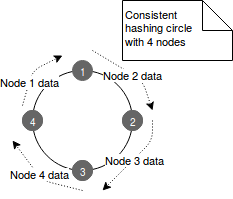 One of the potential problems of above implementation is the fact that some ranges can be more loaded than the others. A solution for that is the use of virtual nodes that guarantee more fine grained presence of the nodes in the circle. In fact each node is assigned to multiple points in the circle called virtual nodes. Physically they all point to the same machine and conceptually they help to distribute the data more evenly. The following image illustrates that:

Thanks to the idea of ring the algorithm used to find the virtual node responsible for given key is straightforward and it can be resumed in the following 2 steps:

One of challenges in consistent hashing ring is the even distribution of the data. The paper "Dynamo: Amazon's Highly Available Key-value Store" makes an insight on 3 strategies implemented in different time in Dynamo key-value store to improve data load balancing in the case of data replicated on N nodes:

After the tests the last strategy appeared to be the right one. Firstly, the partition ranges are fixed and because of that they can be stored in different files. Now, when the data must be remapped, the impacted file is simply copied to new node. There is no need to random access and heavy scan operation. Secondly, the archiving process is simplified. It's related to the previous point - scanning data is not required and the snapshot of given partition represents the content of the file at given moment.

Thanks to this 3rd strategy we can also tell what happens when the cluster changes. If new node appears in the cluster it "steals" the virtual nodes (tokens) from the ring. The nodes holding the data from stolen points transfer the appropriated files to new node. When a node leaves the cluster, the same operation occurs but in reverse order. The node leaving the cluster evenly distributes its virtual nodes and stored data to the remaining nodes. Both operations preserver Q/S property introduced in the Strategy#3.

In the consistent hashing ring we could adopt 2 discovery strategies: store somewhere a map between range and nodes or use clockwise walk to find the node matching given hash key. The first strategy performs well on searching (O(1)) but requires more storage (O(n) where n is the number of ranges). The second strategy has reversed characteristics: searching is O(n) and the storage is O(1). The example of their implementation is shown in the following code snippet. Please notice that it shows the simplified version of the ring without the ideas of virtual nodes and equal-sized partitions:

Consistent hashing is a remedy for the problems brought with the modulo-based hashing. Certainly, it doesn't eliminate the requirement to move the data when a node joins or leaves the cluster. But thanks to the more flexible distribution of data only a small subset of the data must be moved. As shown in the example of DynamoDB in the 2nd section, the consistent hashing is also useful in the context of replicated database. Among 3 placement and partition strategies, the last one based on equal sized partitions and even distribution was judged the most efficient for the needs of this data store. And the last part presented 2 possible implementations of nodes discovery: map-based and clockwise.

#ConsistentHashing on the example of #Dynamo paper explained and illustrated (in images and code) https://t.co/PvjZTNatgX