Code coverage is an useful metric tests definition. But it's not the single one metric which can be used. One alternative are mutation tests.

The post is divided in 2 parts. The first one defines mutation tests. The second shows how to implement them in Java.

Mutation tests are a technique responding to the philosophical problem of "Who will guard the guards ?". In testing world it's translated by "Who will check if the tests test correct stuff ?". In other words, mutation test check if written tests will fail when tested code will mutate. The mutation can be represented as for example the change of boundary value such as MIN_LENGTH in below code:

After changing MIN_LENGTH mutation test is expected to fail. If it does, it's considered as correct. Otherwise, it indicates that it's incorrectly defined and for example it tests bad piece of code.

We distinguish 3 types of mutation tests:

Mutation test follows a strict lifecycle where the word mutant appears plenty of times. This word represents the code containing mutation, i.e. modified with the goal to fail the test. As you can imagine, the first step of mutation test is the creation of mutant.

Killing the mutant is a synonym of 3 conditions to met, commonly called RIP model:

The result of mutation tests is represented as mutation score, calculated from given formula:

We'll see an example of mutation test thanks to PitTest framework and its IntelliJ plugin. A pretty simple example will be used:

The configuration used to ran this code through the Pit plugin is --outputFormats HTML --verbose true --exportLineCoverage true --targetTests com.waitingforcode.tdd.mutation.* . After executing the the first time, you'll see that 2 test cases are missing for boundary conditions. The first is the check on 3-letters name. The second corresponds to the age greater or equal to 18: 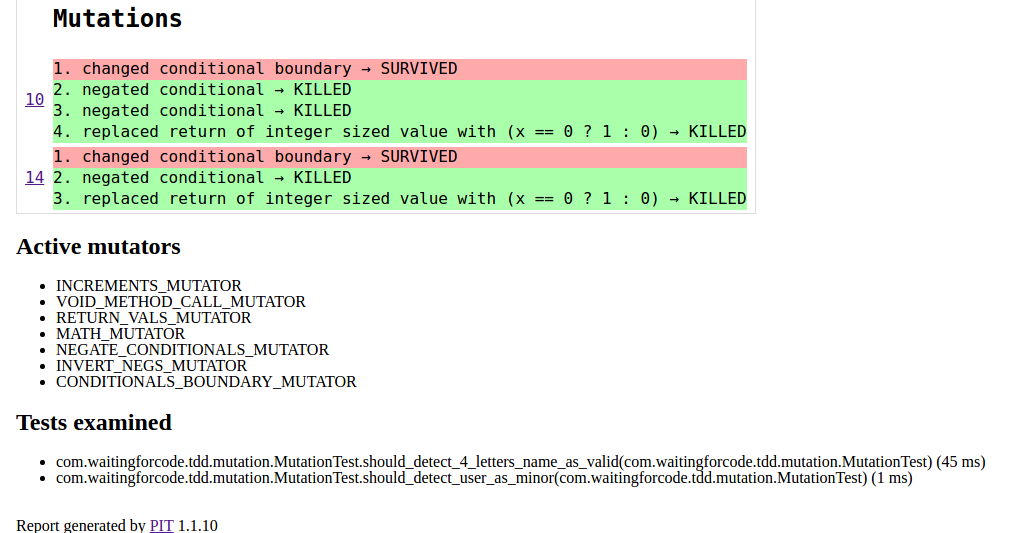 Thus, we add 2 tests to cover these conditions:

Now, after re-executing Pit, we'll see that all test cases are covered (= all mutants are killed): 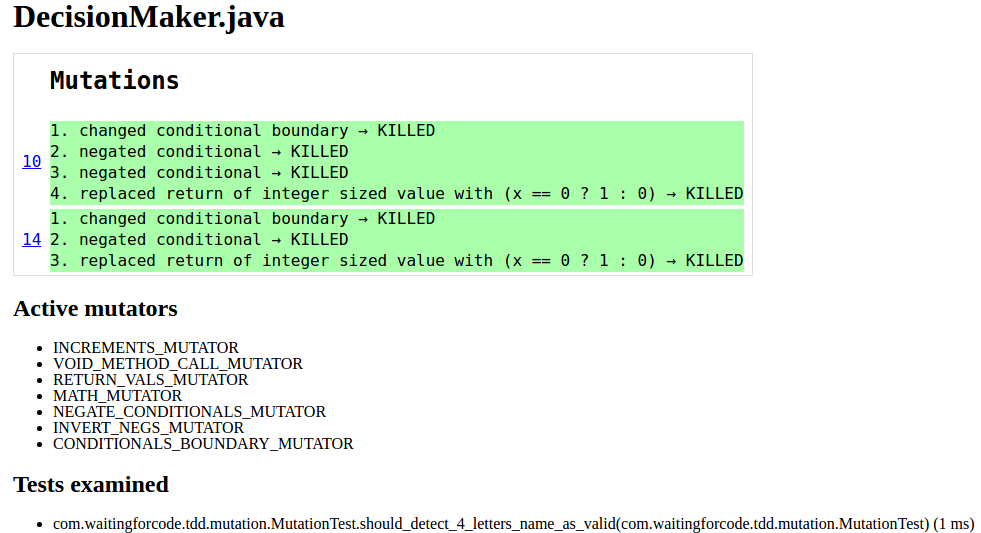 Through this post we can see how much mutation tests can help in the definition of well covered tests. The first part presents the idea of mutation generally. We can learn that mutations tests are a kind of "test guards" detecting if written tests are correct and exhaustive.