It's the second follow-up Data+AI Summit post but the first one focusing on the stateful operations and their interaction with the state store.

When I was preparing this blog post, I was more than surprised seeing how the limit query on a streaming data source works. That's the reason why, instead of going directly to the state store aspect, you will first learn the mechanism behind the global limit in a streaming query. Only later you will see the role of the state store in this kind of query.

At this moment, it's worth adding that the global limit works only with append or complete output mode if the query has some aggregations. If it's not the case, you'll get one of the following error messages:

But let's move on and and suppose that the query is valid. The first executed operation is the local limit represented in the first snippet's subtree by StreamingLocalLimitExec physical node. This local limit nodes takes the same limit attribute as the global limit. It means that every partition will return up to limit rows:

The state store is not yet involved in the query. It happens only in the step executing the global limit. But before that, the data is shuffled into a single partition used by the global limit code. You can see then that this local limit behaves a bit like a partial aggregation where Apache Spark moves the partition computation results to one node for final processing. And that's the moment when the limit operator starts to interact with the state store. 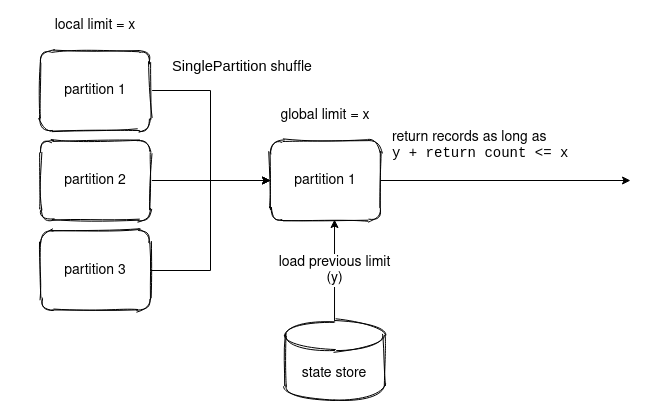 But wait a minute! Why is the shuffle added to the execution plan? It's due to the StreamingGlobalLimitExec's requiredChildDistribution that enforces the single partition character:

The global limit operator in Structured Streaming works ... globally. It'll then limit the number of records returned in all micro-batch queries of the application! From that, I'm sure that you already see the main role of the state store here. Yes, the state store is used to store the number of records returned so far in all micro-batches. And the logic behind that is quite straightforward:

As you can see in the snippet above, the query - remember, it executes on a single partition - starts by getting the previous limit counter that obviously for the first execution will be 0. In the next micro-batch, if there were some new records (let's say x), the value of this counter will be 0+x, and it will increment that way as long as the x is smaller than limit.

When the executed micro-batch does include some new rows to the sink, the state store is updated with the new counter (cumulativeRowCount). If not, the micro-batch returns an empty because none of the rows will meet the filter predicate.

If I satisfied your curiosity about the global limit implementation in streaming queries, I'm glad. As you saw, it involves multiple intermediary steps like a partial aggregation simulation. And only at the end, it interacts with the state store to control the total number of records returned to the sink.

Did you already use the global limit in #StructuredStreaming ? I didn't and that's why I was quite surprised to discover it among the stateful operations ? If interested, you will find more details in the new blog post ? https://t.co/DaQOE6DzHb