After previous introductory posts, it's time to deep delve into the state store API and implement our own custom state store.

The article starts with a short presentation of 5 main groups of functions every state store has to implement. The second part shows how they interact with the MapDB state store API.

The first main group of operations is called CRUD and it represents all functions that your StateStore will use to write and read the state. More exactly, they're represented by these methods:

There is nothing more to say, maybe except highlighting the fact that the UnsafeRow instance from put method can be reused. In consequence, if you decided to store UnsafeRows in the state store, in the end, you may only store the last entry (since UnsafeRow is mutable and can be reused). That's why it's important to use copy() method before saving anything to the state store.

The next category of functions groups everything related to the transactions management. Because yes, the state store has the transactional aspect. For every task, so for every processed partition, so automatically for every state store (is partition-based), Apache Spark adds a task listener where it verifies whether the state store has been committed. If it didn't happen, the abort() method is invoked. Otherwise, nothing happens. The state store is committed after successfully processing all input elements and after removing any expired state. Technically, it happens thanks to the callbacks registered in NextIterator and CompletionIterator, both being used in the stateful operations. Below you can find a short summary for this part:

The 4th group are the functions responsible for metrics tracking. Here, for the first time, you will find the methods from StateStore and StateStoreProvider. The former implementation returns the metrics for the current state store version. The latter only returns the list of supported custom metrics by the state store. Internally these metrics are represented as one of 3 implementations of StateStoreCustomMetric, and before returning them to the logs, they're converted to SQLMetrics that are in fact the accumulators:

The final category of functions - well technically it's a single function - covers the maintenance of the state store. It means that this function implements any performance optimization and clean up tasks. It's invoked as a background thread and in the default state store, it creates snapshot files and deletes old state store versions:

The following image summarizes the interactions between StateStore and MapDB APIs: 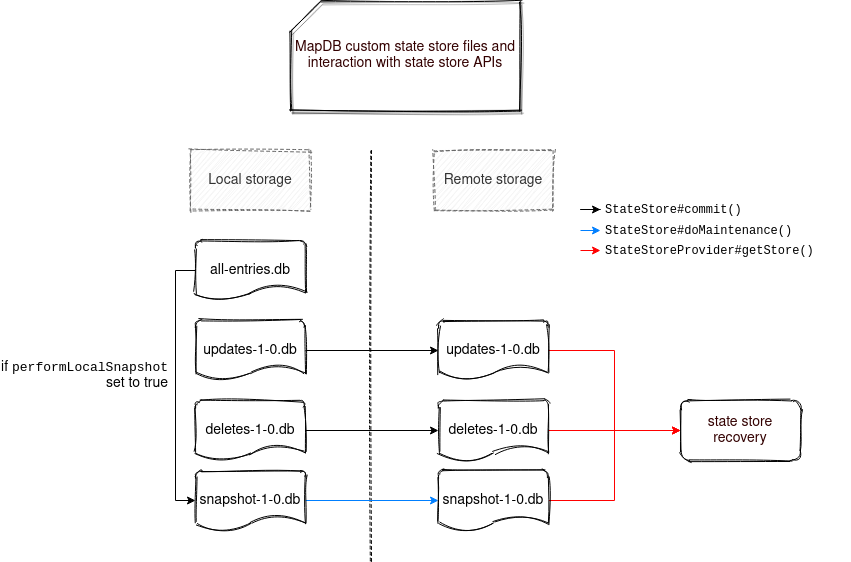 As you can see, from left to right, the stateful application interacts with three types of files. The first of them called all-entries-default-1-0.db is the snapshot version of the state store, ie. it stores all states committed so far. When the performLocalSnapshot flag is true, all its values are copied to a "snapshot" file, which will be later synchronized by the maintenance task to some more resilient storage.

On the rightmost part of the diagram, you can see a state store recovery operation that will be used in case of the application's restart. This operation will read either the snapshot file or the updates and deletes if the snapshot is unavailable, exactly like in the default state store implementation.

Sure, it was only a high-level view of the implementation, but I hope it helps to catch better the interactions between state store and MapDB. If you are interested more in the code, you can check this repository prepared for this Data+AI 2020 Summit follow-up post series.

State store API has 5 main groups responsible among others for simple CRUD operations and more complex transaction management. You can discover them and the global overview of the MapDB store implementation in the new #StructuredStreaming blog post ? https://t.co/Ihick56M3F