Unexpected things happen and sooner or later, any pipeline can fail. Hopefully, sometimes the errors may be temporary and automatically recovered after some retries. What if the job is a streaming one? Let's see here how Apache Spark Structured Streaming handles task retries in micro-batch and continuous modes!

To understand the retry mechanism, it's good to explain the task scheduling logic first. Everything starts when the DAGScheduler defines the stage to compute. It first checks whether the stage has some missing tasks and no missing parent stages. If yes, it passes the list of stage tasks from the submitMissingTasks to the TaskSchedulerImpl#submitTasks method.

Inside the reviveOffers, the backend - everything still happens on the driver - sends a ReviveOffers message to itself. And that's the moment when the real scheduling begins! Upon receiving this message, the driver backend calls a makeOffers method which under-the-hood, does the following:

The executor backend intercepts the message and calls the Executor#launchTask method. This method creates a Runnable task instance and adds it to the worker thread pool. At this moment, the task can start if the executor has enough compute capacity. 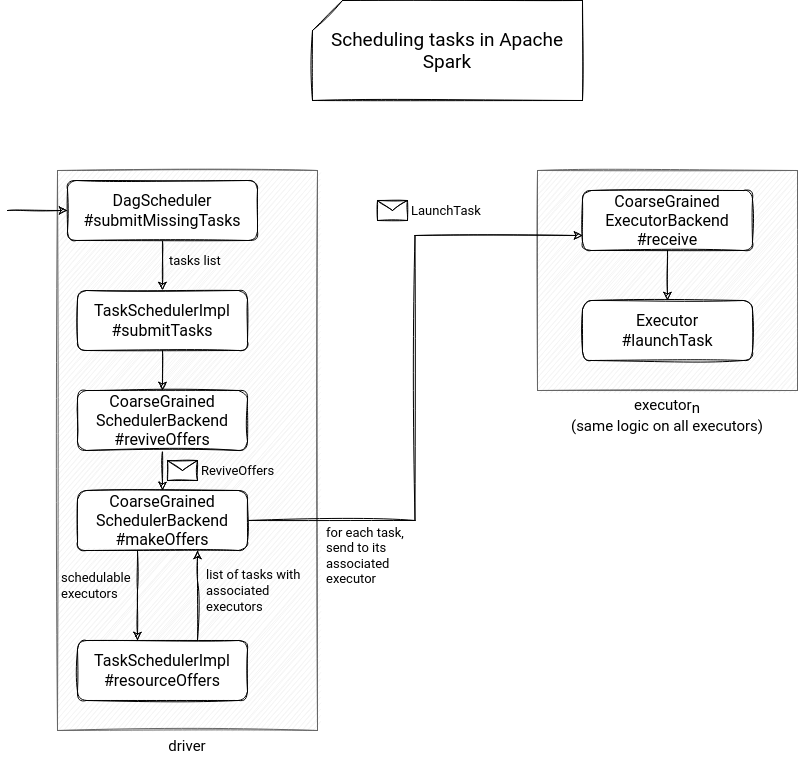 The previous section introduced the main classes involved in the task scheduling. They should help find out what happens with the retries, because the flow is quite similar. The Runnable instance of the task introduced in the previous part runs in a try-catch block. If any exception happens, the catch block handles it and communicates the failure to the executor by calling the CoarseGrainedExecutorBackend#statusUpdate method.

Inside this method, the executor builds a StatusUpdate message and sends it to the driver. The message arrives to the CoarseGrainedSchedulerBackend instance and the driver can now update the task state in the TaskSchedulerImpl#statusUpdate. Depending on the task outcome, the scheduler either marks it as successfully executed or enqueues it for a retry: 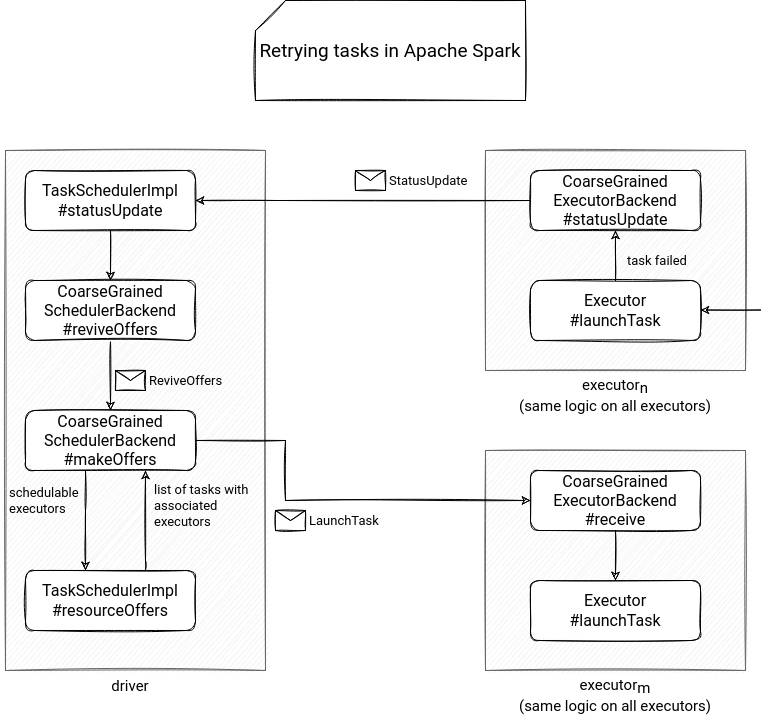 The retry semantic presented above works for Apache Spark SQL batch and Structured Streaming micro-batch pipelines, but what about the Structured Streaming continuous trigger? Well, you won't see any changes - at least in the task scheduling part. So in the logs you should see things like "Task 1 in stage 0.0 failed 6 times, most recent failure: Lost task 1.5 in stage 0.0 (TID 6) (192.168.0.55 executor driver): org.apache.spark.sql.execution.streaming.continuous.ContinuousTaskRetryException: Continuous execution does not support task retry" but actually the retry won't be real!

Everything because of the ContinuousDataSourceRDD#compute running the continuous streaming query:

The difference with the micro-batch comes from a different semantic. Continuous processing creates one long-running task for each input partition, avoiding the micro-batch scheduling overhead. Because of that, several points are more difficult to implement. Even the simple retries counter is not obvious since each task lives through the continuous query and not the micro-batch! An alternative discussed in the Task level retry for continuous processing Pull Request was a global retry mechanism. In this solution, all the tasks are restarted from the last committed epoch of one of the long-running processes that failed. However, it's not implemented yet, and as you know, the continuous engine remains marked as "experimental", so there should be many things going on in the new releases!

If you want to see some of the presented points in action, I prepared a short demo using the LocalSchedulerBackend for the presentation simplicity:

To sum up, two things to remember. Micro-batch supports task retries through the same mechanism as the batch pipelines. On the other hand, the continuous mode, which by the way is still (3.2.0) marked as experimental, doesn't support task retries due to a different execution semantic. Unlike batch and micro-batch, it runs one long-running task per partition.

How does Apache Spark handle task retries in #StructuredStreaming? That's the question I tried to answer in the new blog post ? https://t.co/D3ZjqHGsIt