Broadcast variables send object to executors only once and can be easily used to reduce network transfer and thus are precious in terms of distributed computing.

The first part of this post describes some points about broadcast variables. It makes an insight of their purposes. The second part shows how these variables are sent through the network. The last part, with usual learning tests, gives some use cases of broadcast variables.

Broadcast variables are read-only data sent to executors only once. They are a good solution to store some immutable reference data, for instance small dictionary shared among all executors. The data is sent lazily, i.e. only when it's needed by executors. Thus, if a broadcast variable is sent and it's never used, it won't be physically transfered.

Among data sent as broadcast variables we can distinguish explicitly defined broadcast objects and Spark-related objects. The first ones are easy to understand. They represent all objects wrapped by SparkContext's broadcast method. The 2nd category of the broadcasted objects represents the ones used internally by Spark. We can find there:

The data stored in broadcast variables is sent through BitTorrent-like protocol. It's a Peer to Peer protocol, well known by the users of illegal programs used several years ago to download music, movies and other copy righted files. And the similarity is justified. In the case of these programs, one user publishes a file that can be downloaded by other users (Users#2). Once downloaded, yet another users (Users#3) are able to download the file but not only from the original publisher but also from the ones who downloaded it initially (Users#2). The following schema shows this example: 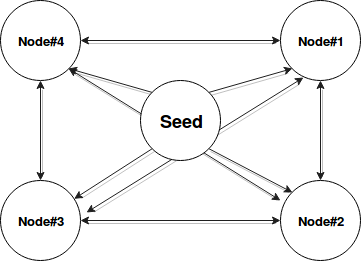 In Spark, torrent protocol works exactly in the same manner. Every broadcasted object is first serialized. After it's divided on smaller chunks by the driver. Chunks size corresponds to the spark.broadcast.blockSize configuration property and by default is of 4MB. The object responsible for this operation is org.apache.spark.storage.BlockManagerMaster. In addition to the information about blocks of broadcast object, this manager also communicates with exposed HTTP endpoints to discover which executors store given block or to indicate block removal. It's visible in the logs with following entries:

When an executor needs the broadcasted object, it will first check if it already has the object's chunks locally. If it's the case, it will assembly them and deserialize the object. But when it's not the case, the executor will first fetch the chunks from the driver and/or other executors. Once all chunks are retrieved, they are saved locally and used as if they were there from the beginning. The order of fetching blocks is not guaranteed, i.e. they can be retrieved in order (ex: 1, 2, 3, 4 for 4 blocks) but also in misorder (4, 2, 1, 3). After fetching, they're ordered internally. The org.apache.spark.broadcast.TorrentBroadcast#readBlocks() method shows that:

The following tests show simple use case of broadcast variable and some important specificity - without implemented equality, at every stage the broadcasted object will always be different:

To understand by the object broadcasted in the second test is never the same, you can have a read of the post about Spark's Singleton to be or not to be dilemma.

Through this post we've discovered some facts about broadcast variables. As shown in the first part, they're omnipresent read-only objects in Spark programs. They move the objects shared among executors in chunks that are later fetched and assembled by executors. The communication is guaranteed by BitTorrent-like protocol. The last part illustrated broadcast variables use through 2 simple learning tests.