After HyperLogLog and Count-min sketch it's time to cover another popular probabilistic algorithm - Bloom filter.

Bloom filter is explained in 3 parts. Th first defines the algorithm and also shows its use cases. The second one talks briefly about false positives while the last shows Bloom filter in action throughout Algerbird's implementation. This post is the first from the series about Bloom filters. Further posts will present subtypes of the algorithm described here.

Bloom filter is another space-efficient probabilistic data structure letting us to check if given element is in the set. Thanks to that it can be used for instance to detect duplicates or to avoid to make unnecessary I/O operations in some databases (membership is verified before reading the data physically).

The algorithm is based on a bit vector of size m and k independent and uniformly distributed hash functions. When a new element is handled by the filter, it's hashed against each of the functions. Their results correspond to the bit vector indexes that will be set to 1. The same operation is made to check membership. The algorithm reads the values from the computed indexes and depending on the result, it tells whether:

The following image summarizes the logic behind Bloom filter: 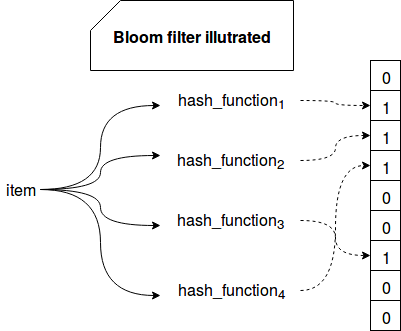 Hence the false positive matches are possible, i.e. we can certainly exclude an element from the set but we can only probably tell that it's in the set. In the other side, Bloom filter never returns false negatives (at least in its basic version, it's possible in other subtypes as Stable Bloom filter covered in one of next posts).

A false negative claims that an element doesn't exist in the set while in fact it's not true.

The efficiency of Bloom filter relies on the size of the bit vector. The precision decreases as soon as the vector fulfills since every value will be returned as present (no more space with 0). Thus it's not a good solution for unbounded data. Moreover, the basic version of Bloom filter doesn't support removals and it can only grow up. Fortunately this basic version was extended in a lot of fields. Scalable Bloom filter supports removals, Stable Bloom filter fits to unbounded (e.g. streaming) data and Layered Bloom filter helps to track the number of times when given item was added to the set.

In our daily work we can meet Bloom filter in Apache Cassandra where it's used to verify if the requested data may exist in one of SSTables. Since Bloom filter is able to exclude the presence of given element in the dataset, it avoids unnecessary lookups and I/O operations.

The number of hash functions should be a trade-off between the accuracy and the performance. If we have too few hash functions, the risk of receiving false positives increases. In the other side we risk to slow down the response time.

Bloom filter is one of approximate data types provided in Algerbird. It's used in the following snippets to show how Bloom filter works:

This post shown some points about Bloom filters. Based on similar principles than previously described Count-min sketch and HyperLogLog, it uses hash functions and a bit vector to test the membership of an element in given dataset. It's space efficient and with optimal settings lets to highly reduce false positive rate. However, it's unable to tell that tested element belongs certainly to the dataset. Instead it can only tell that it certainly doesn't belong to the dataset. Another drawback is the lack of adaptation for unbounded datasets by the basic version of Bloom filter. Fortunately some extensions exist and can be used to deal with such kind of data.

The first post from series about Bloom filters explaining their most basic version https://t.co/nlvv1tgP8z pic.twitter.com/NkKitKZnUM