The day I was punished by the mutability

Home Scala collections The day I was punished by the mutability

As a former Java engineer, when I have started to work with Scala, I was very early punished for my bad habits about mutable collections. In this post I will show you the story which learned me to prefer the immutability everywhere it's possible.

This post tries to explain the importance of immutable collections in Scala - something quite unnatural for a lot of people like me coming from Java ground. I hope the post will convince you (if you are not yet convinced) and will avoid a lot of debug. The first section presents the context that made me appreciate the immutability of collections. The next one presents the solution with the use of immutable data structures. The last part provides more information about good and bad points of them.

Some years ago I was working on a project sending DynamoDB batch get requests. To do that, I used a library shared across all the projects. Since it worked pretty well at that moment, I added it into my project's dependencies confidently.

The library executed batch queries with asynchronous DynamoDB client and made returned a limited number of items. That means that from time to time in order to read all records, we needed to run it in a loop. Fortunately, the SDK provides com.amazonaws.services.dynamodbv2.model.QueryRequest#withExclusiveStartKey(java.util.Map method to implement the looping. The failing code looked similarly to the following snippet and the illustration:

As expected, the code fails because of the concurrent writes on the same ArrayBuffer and conflicting resizing operations. Since it was difficult to illustrate the failure on the embedded database, I written a short schema to show the real context failing with ConcurrentModificationException: 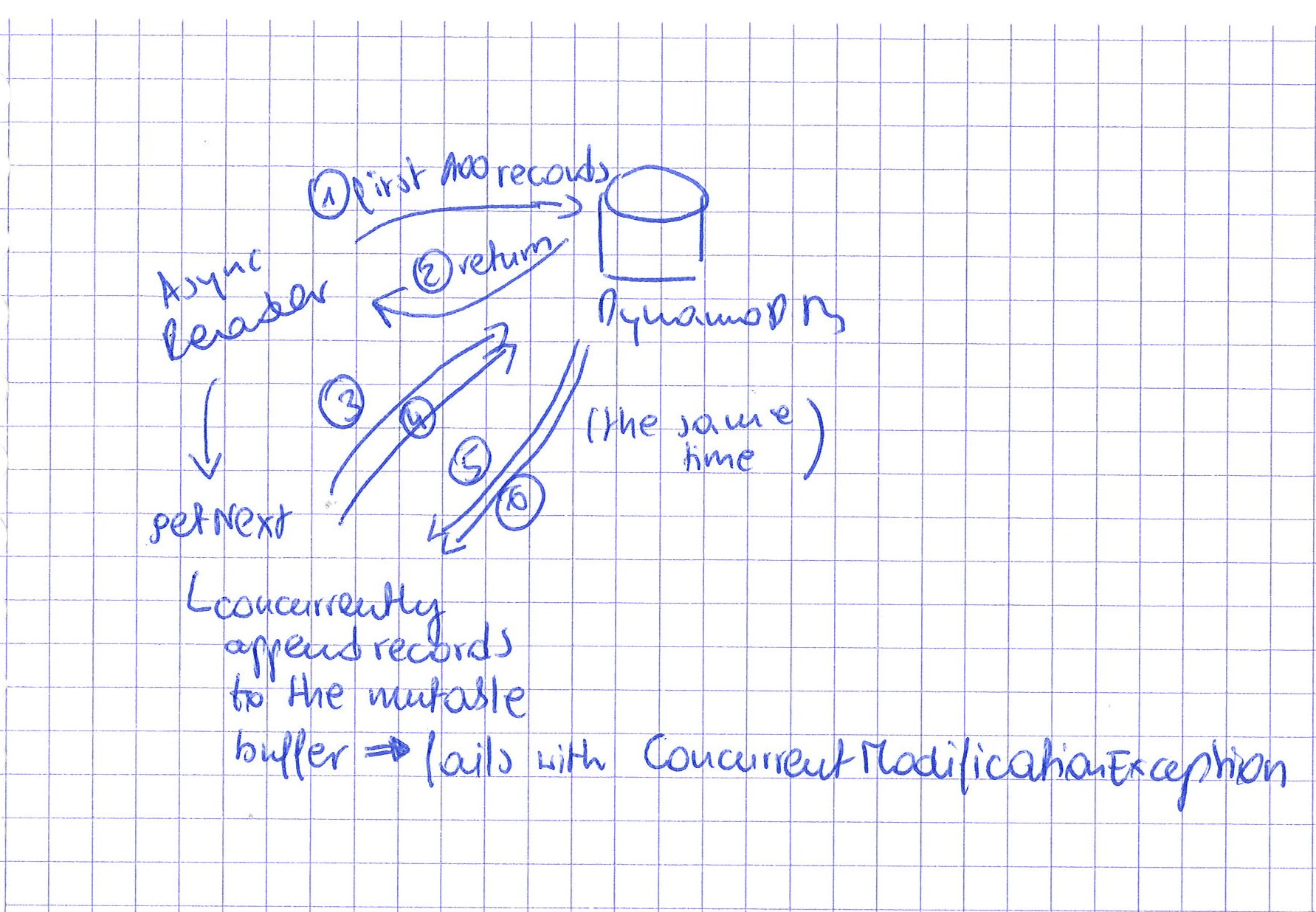 The fix with immutable collection

To fix the such code we have different choices. The first one is the use of synchronized block to eliminate concurrent writes into the buffer. However, this approach adds some blocking to the application, and therefore slows it down. Also, the blocking can lead to more serious problems than several milliseconds of difference, as deadlocks.

Another and much better solution than synchronized block is the use of an immutable collection. The main advantage, shown by the way here, is the thread-safety. The created collection can't be modified in-place. It fits well for our use case with recursive data consumption::

Aside of the thread-safety, the immutable collections provide other advantages. First, they simplify the reasoning about the program. Conceptually the immutability reduces the scope of the object. Concretely, that means that we don't need to worry whether somebody will modify the given object elsewhere - even though the collection is passed as a parameter to other methods. The immutability is also a good way to express the intent. By using an immutable object we clearly mark it as the one which won't and shouldn't be modified outside of its creation scope.

Unfortunately, it's not easy to switch to the immutable collections when during several years we had been using the mutable ones. We are often tempted to stay with our old habits, particularly at the beginning. It's often the case for a lot of for loop-related things when Scala newcomers copy old Java idioms like this one:

This code can be easily rewritten with the help of map function and therefore, not use the mutability:

According to some microbenchmarks (Scala's immutable collections can be slow as a snail or Benchmarking Scala Collections), the immutable collections can sometimes perform worse than their mutable colleagues. But since conceptually they're easier to work with and in addition to that, they're thread-safe, we should prefer them as often as possible. A good rule of thumb would be their use by default and the switch to their mutable versions only when we encounter some performance issues because of them.

In this post, through 3 sections, we could discover some positive aspects of the immutable collections use. As shown in the 2 first parts, the immutable collections guarantee thread-safety. It can be pretty easily detected in the case of concurrent writes to a mutable sequence. Depending on the used implementation we'll either have to deal with ConcurrentModificationException or other, more specific errors. But the thread-safety it's not the single reason to prefer the immutable collections. As proven in the 3rd part, they also facilitate the understanding of the application. Everything we need to do is to get rid of the old "Java" habits and do not be afraid of the change. After all, in the case of any problems, we can always switch to the mutable version.

In today #OneScalaFeaturePerWeek post I shared the context which made me appreciate the immutability in #Scala https://t.co/tPzoKmz9N9