One of the greatest properties in data engineering is idempotency. No matters how many times you will run your pipeline, you will always end up with the same outcome (= 1 file, 1 new table, ...). However, this property may be easily broken when you need to evolve your pipeline. In this blog post, I will verify one possible way to manage it in Apache Airflow.

The post is divided into 2 parts. In the first one, I will describe my idea to handle DAG evolution with start_date and end_date attributes. In the second part, I will verify whether I was wrong or not about that concept. 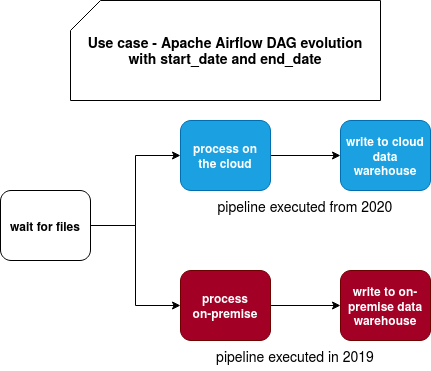 What is the goal of such a split? As explained in the introduction, the main purpose is to preserve idempotence, so avoid the situation when you will relaunch the pipeline for 2019 and generate the results for your cloud data warehouse instead of the on-premise one (since all 2019 must be stored there). Are there other alternatives? Yes:

But let's check whether start_date and end_date can be also used as a solution.

The structure of my tested DAG looks like in the following snippet:

I set all of the date-like parts to have the most complete view of the DAG and avoid having any defaults set magically by Apache Airflow. After that, I enabled the DAG and few minutes later I had the result presented in the following picture: 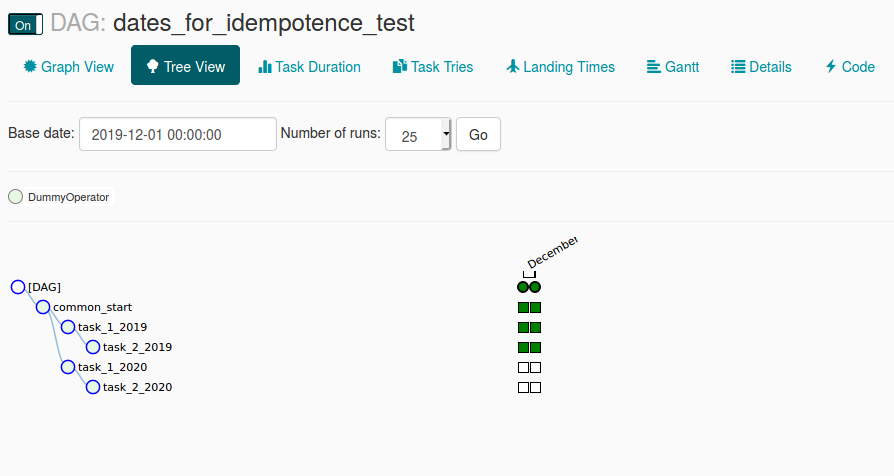 As you can see, it almost worked as expected? Why "almost"? Simply because the DAG won't execute for 2020 - these 2 DAGRuns are for 2019, so for the old processing logic. Why did it happen? The problem is located in SchedulerJob#create_dag_run method, and more exactly here:

As you can see, the algorithm takes all end_date attributes of the tasks, independently on the branching. Later, it takes the smallest one and compares it against the next DAG run. It worked fine for 2019 since the smallest end_date was "2019-12-31T23:59:00" and obviously, it didn't work for 2020 since the DAGRun date was always bigger than the smallest end date of the tasks. In consequence, DAGRun for 2020 will never be created.

Ideally, but I'm saying that without having a deep knowledge of Apache Airflow internals (say me if I'm wrong), we should base the DAGRun creation on the DAG's end_date and if, and only if, this date is not set, use the end_dates of the tasks, but use the biggest one. In other words, the fact of triggering a task from start_date and end_date should be controlled at the task's instance level. However, the problem I see is that the start_date and end_date from the task don't have the same meaning as for DAG. They're used to compute the task execution time and end_date is always overridden to the current time:

To sum-up, my experience shows that it won't work as I expected, so any of 2 techniques listed in the first section should be considered as a solution for managing idempotence for DAG's logic changes.

Can we use start_date and end_date to version a DAG in #ApacheAirflow ? ? Not really. More details in my today's blog post https://t.co/tQzjmpm2ij