When I was playing with Kafka HDFS Connector, I saw that the generated files are suffixed by some numbers. It intrigued me and I decided to explore the topic in this article.

Even though I'm not very familiar with Kafka Connect API, I will try to analyze the code source and answer the question of why these suffixes are generated?

That name is created in io.confluent.connect.hdfs.FileUtils#committedFileName method where all of the filename components are passed as parameters:

But it's only the visible part of the iceberg, the easiest one to find. The whole logic in the hidden part is important as well. Let's see now what happens when the files are synchronized from an Apache Kafka topic to HDFS.

The entry class is HdfsSinkConnector and by itself it does nothing but configuring the connector and exposing the class representing the tasks that will physically execute the synchronization between Kafka and HDFS. These tasks will be the instances of HdfsSinkTask and inside you will find much more logic.

The task instance creates an instance of DataWriter that receives, from HdfsSinkTasks's put method, all records to synchronize. But under-the-hood, DataWriter doesn't persist the data. It delegates this task to TopicPartitionWriter instances which, as you can deduce from the name of the class, are responsible for persisting every partition.

How does it work? The records are first buffered in memory of the TopicPartitionWriters and later every record is written into a temporary file, still at partition basis. At the end, when the current execution terminates, the commit happens and the temporary file is transformed into the final one with the rename operation (temporary → committed).

Internally, all this logic is managed with a state machine that I will introduce in the next part.

Let's see first the sequence of states in the task execution process: 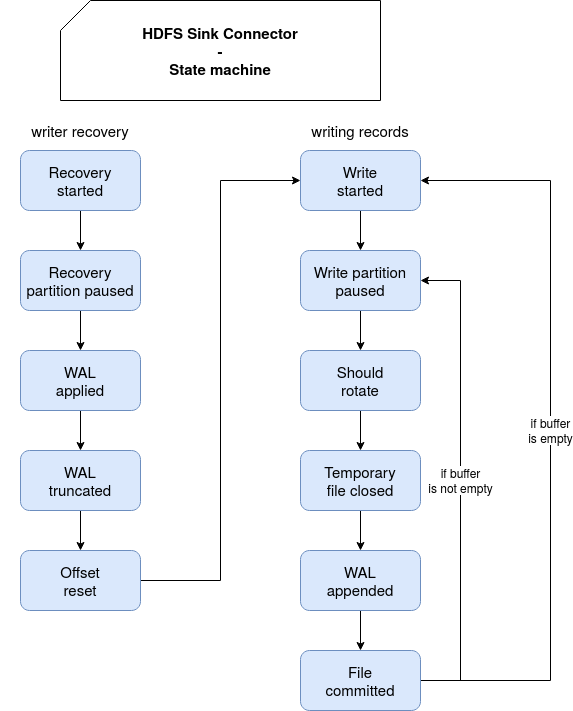 Everything starts when the TopicPartitionWriter instance is created where the recovery stage is executed (DataWriter#open, recovery called after partition assignment when TopicPartitionWriter instancess are created). During the recovery, the writer checks in the Write Ahead Logs (WAL) whether there are some pending temporary files that need to be committed. If it's the case, the commit (rename temporary --> committed file) happens. Later, a new WAL file is created and the next offset to the process is resolved. Before going to the record writing, let's focus on these 2 aspects:

Once we know what to do (ie. what data read from the partition), the execution resumes. Some records are first buffered and later the consumption from the partition stops for the time of flushing the buffered entities to the file system.

Once all buffered files are written, the loop starts again by resuming the consumption of given partition:

As you can learn from this post, commits, WAL file, and offsets in the file names are 3 important techniques in Kafka HDFS Sink to ensure an exactly-once delivery. However, keep in mind that exactly-once delivery means here that every record will be written only once. If your topic has duplicates because of some data production issues, you will still retrieve them on the written files and should handle them in your application logic accordingly.

What is the logic behind the exactly-once delivery semantic of #ApacheKafka #HDFS sink? I focused on this aspect in my today's post ?https://t.co/wYg2HXH34a