Who says transaction, automatically invokes isolation levels, so what can be viewed by the consumer from uncommitted transactions. Apache Kafka also implements this concept and I will take a closer look on it in this blog post.

I divided the post into three parts. The first one shows a big picture of the interaction between the client and the broker. The next 2 ones explain, respectively, records retrieval and aborted transaction handling. Finally, the last one shows a quick demo of isolation levels.

Let's start with a general explanation of the isolation level. When you initialize a KafkaConsumer, you can set the property called isolation.level to control what transaction records are exposed to the consumer. Two values are then possible, read_uncommitted to retrieve all records, independently on the transaction outcome (if any), and read_committed to get only the records from committed transactions.

The committed isolation level doesn't mean that the consumer will only read the transactional records. It will still read, unconditionally, the non-transactional writes as well. The difference is that it won't read the not committed records. 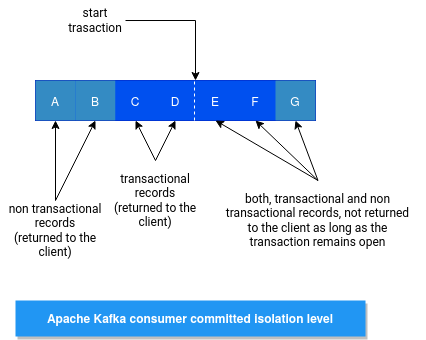 The isolation level is set for each consumer and sent to the broker with the fetch request. On the broker's side, the isolation level is later transformed into an instance of kafka.server.FetchIsolation (one of FetchLogEnd, FetchTxnCommitted, FetchHighWatermark), and passed from ReplicaManager to the Log, where the physical data retrieval happens. The retrieval consists of finding the max allowed offset and reading the records up to it:

In the following schema you can see the classes and methods involved in the records reading:

The offset for the committed isolation level is returned from fetchLastStableOffsetMetadata method. Internally, it uses Log's attribute called firstUnstableOffsetMetadatathat tracks the earliest offset of an incomplete or not replicated yet transaction. It retrieves this information from these attributes of ProducerStateManager, always taking the first entry (since they're sorted by the data structure):

You can learn from this snippet about the high watermark, which corresponds to the biggest offset, fully replicated to the partition's replicas. The unstable offset changes when the log has a new record appended or when the log is truncated. This offset information is, by the way, used in the uncommitted isolation level. This level, represented by FetchHighWatermark isolation level class, retrieves the max offset from fetchHighWatermarkMetadata.

Finally, but it's not related to the transaction isolation levels, the fetch can return the last written entry if the request comes from a follower or future local replica (replicaId equal to -3).

The next thing to notice regarding the isolation level is this flag variable:

As you can see, only the committed isolation level will not contain the aborted transaction's information in the response sent to the client. And everything happens in this part, where the broker iterates over all segments matching the queried offsets:

Later, the information about aborted transactions is retrieved from transaction index associated to the given log segment:

I found the reason for that in the KIP-98 (I'll remember this number for life, I think :P): 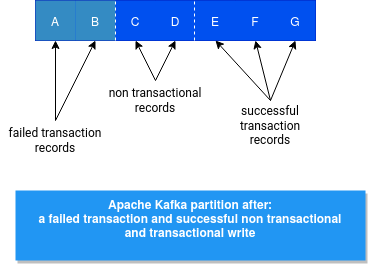 Thanks to the code presented above, the consumer will skip all records generated by the first transactional consumer.

As for every transactional system, isolation levels are also present in Apache Kafka. In this blog post, you discovered some hidden details of the implementation and also learned (at least, I did) some new concepts like watermark or last stable offset. And at the same time, I can remove another point from my transactions discovery backlog!

This week no Apache Spark on the blog, sorry ?‍♂️ I had to finally publish the last post from the interrupted transactions exploration in #ApacheKafka. And I did it here ? https://t.co/pLWMscfgqC