In March I published a blog post about timestamp-based lookup in Apache Kafka. But as you know, it's not the single lookup possibility. Another one uses indexes and it will be the topic of this article.

I will start this blog post by introducing some storage details of the offset index files. After this introduction, I'll explain how Apache Kafka uses this information to know the position of the record to read in the logs. To not repeat myself but give you a little bit more context about the basic storage, I will just recall the picture summarizing the composition of the log from Timestamp-based lookup in Apache Kafka blog post: 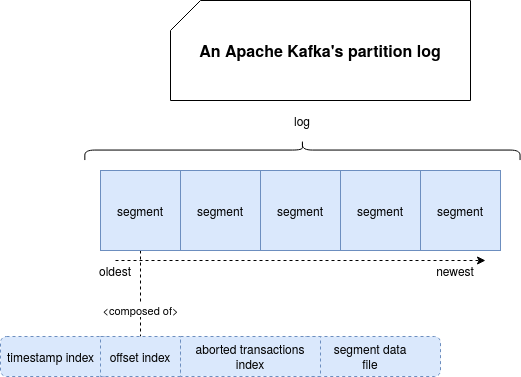 Internally, the offset log is represented by the ... OffsetIndex class. As it's indicated on the picture, the offset index is associated with a log segment and it stores the relationship between the global offsets (the ones from the partition) to the physical location of the record in the segment file.

On this occasion, it's important to highlight how the offsets are stored. The offset index uses relative offsets to the base offset of the index file. What does it mean concretely? For example, if the index stores the records starting from the offset 100, then any subsequent offsets will be stored as 100 + ${offset}. In other words, the offset 120 will be stored as 20 and not 120. Thanks to this optimization, every mapping pair uses only 8 bytes, 4 for the relative and 4 for the physical offset.

Under-the-hood, the relative offset computation is made by this method of AbstractIndex class shared by both OffsetIndex and TimeIndex class presented in March:

OffsetIndex exposes this search possibility from lookup(targetOffset: Long) method. If an entry is found, it returns an instance of OffsetPosition class constructed that way:

where both, relative and physical, offsets are computed from this formula:

As you can see, we retrieve here the magic number of 4 which corresponds to the size of every offset. Besides, this snippet shows how the data is written to the index file. When a new record is appended to the segment, it first writes the relative offset as a key and later, more exactly 4 bytes further, it adds the physical position (hence "+ 4" in physical).

After, this physical position is used to find the matching records in the segment file:

As you can learn from this article, the offset index has some points in common with timestamp-index. It shares the same parent class, thanks to which it uses the same, entry size-controlled behavior, and the identical binary search method for the lookups. Apart from that, it's important to keep in mind the relative offsets and the physical location for the records stored in the index.

With topics and partitions, offsets are one of the main building blocks of #ApacheKafka That's why in my today's post I presented the offset-based lookup ? https://t.co/YnkojowGa4