Very often an appropriate storage is as important as the data processing pipeline. And among different possibilities we can still store the data in files. Thanks to different formats, such as column-oriented ones, some of actions in reading path can be optimized.

This post is the first one devoted to Apache Parquet format. As purely theoretical and introductory post, it won't contain any code snippet. In place of that, it'll try to give some global ideas about Parquet's ecosystem (1st section) and the storage format (2nd section) without going really deep.

What is Apache Parquet ?

In the column-oriented storage the data from specific columns is stored together in one or logically separated chunks. The benefits of this type of storage are:

The Apache Parquet project is composed of 3 main modules those meaning is not always obvious at first glance:

Before introducing some storage details, let's clarify that Parquet files are immutable. So in order to change already created file, we need then open it, save in other place and remove at the end. This limitation is caused by the storage internals that contributes to Parquet efficiency.

The files written by Parquet are stored in a special format composed of the layers defined in the image below: 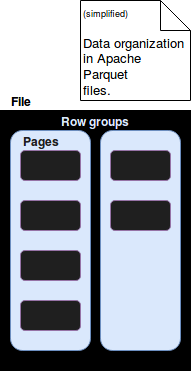 As you can see, a Parquet file is composed of row groups. Each row group stores subset of data in pages that grouped together compose a column chunk.

The metadata is very helpful to optimize storage (efficient compression) and querying (e.g. filtering that can be optimized with min/max values).

Apache Parquet is a storage format well suited for queries not involving all columns. As shown in the first benchmarks at Twitter, the scanning time was up to 5 times smaller than in the case of Thrift storage. This efficiency is achieved not only thanks to column-oriented storage but also thanks to other optimization techniques are statistics or column-level compression discussed briefly in the 2nd part of this post. But all of that will be explained better in further posts.

#ApacheParquet will be the topic for next weeks posts: short introduction https://t.co/kSUbkaj8Ap before the real exploration