Apache Spark has this great capacity to optimize joins of bucketed tables but does it work on partitions as well? No, and to understand why, I invite you to read the following sections of this blog post ?

The idea for this article born after an exchange I had on LinkedIn (👋 Pietro) where we're wondering whether it was possible - and if not - why, to use a partition-wise joins that do exist for example in Oracle. To address this question, the article is composed as follows. First, it presents the idea of a partition-wise join. Next, it tries to show how the bucket-based local joins work. The last part tries to answer why the partition-wise join is not present in Apache Spark and how it can be simulated.

Oracle is only one of databases supporting partitioning. And since it's a commercial solution, let's take an Open Source one like PostgreSQL to see what happens. To start, the tested partitioned tables look like that:

As you can see, we start by creating a "base" table. Later the PARTITION OF operator adds 4 partitioned tables. Every partition declaration follows with an operation managing row assignment to the given partition. In the example, you can see that it's the classical hash-based mod division algorithm putting even ids to the partition 0 and odd to the partition 1.

Let's see now how the execution plans look like. The first execution tree shows the plan for the disabled partition-wise join optimization (SET enable_partitionwise_join TO off):

What happens here? To recall, the plan should be read bottom-up. You can see that both tables are completely read and sorted by the join key. After that, the database engine performs the merge join. It's quite normal for a join operation. Does the plan with partition-wise join enabled look the same?

The partition-aware plan is different. As you can see, the merge join operation is performed directly at the partition level, which gives a bit more room for optimization like parallel execution of these parts. On the other side, it doesn't come without extra costs since it may require much more CPU time and memory.

Can partition-wise join be implemented in Apache Spark? As you already know, Apache Spark can perform the bucket-wise joins without redistributing the data. To understand how the partition-wise join could work, let's explain first how the bucket-based join works. The RDD responsible for bucketed-data reads is FileScanRDD. Its constructor takes a sequence of FilePartition files that, as their name indicates, are the partitions:

One of 2 places creating this RDD is createBucketedReadRDD method from FileSourceScanExec. Once again, the name is quite meaningful and helps to see the intent of this function. As you can deduce, it creates a "bucketed" version of the FileScanRDD. How? First, it groups all input files by bucket id. The bucket id is retrieved from every file because the bucket information is stored directly in the file name, always in the same place (after the last "_" and before the "c"). For example, in the part-00000-941bcfda-0876-413c-bee4-06bd691877d4_00001.c000.snappy.parquet file, the bucket number will be the "00001" part. After grouping the files, Apache Spark applies the bucket pruning optimization and transforms the outcome into a Seq[FilePartition] expected by the FileScanRDD.

A FilePartition instance stores the partition number and a list of files present on this partition:

No surprise then, thanks to this operation, all files from a bucket are already located in the correct input partition. But it doesn't guarantee the absence of shuffle to perform the join operation of 2 same bucketed datasets. The no-shuffling guarantee is provided by the outputPartitioning attribute of the FileSourceScanExec. If the data source supports bucketing, the outputPartitioning will be the val partitioning = HashPartitioning(bucketColumns, spec.numBuckets). This snippet also shows how important it is to keep the same number of buckets for every dataset. Without that, the shuffle will still happen since the partition numbers won't be consistent!

The partitioning returned by the FileSourceScanExec is checked by EnsureRequirements:

For the case of bucket-based join, the first case will be satisfied, so it won't execute as a shuffle exchange. To sum up, since the input files are loaded to the same *input* partitions from the beginning, the step of redistributing the data to join won't be necessary.

Apache Spark knows that the bucket columns are involved in the join operation because of the metadata stored in the catalog. The catalog also contains the information about the columns used to partition the dataset for the ones written with partitionBy method. However, it doesn't use this information for data locality-based operations. I didn't find the references mentioning the whys, but IMHO, it comes from the conceptual difference between buckets and partitions. Buckets are known as "partitions of partitions", so they store smaller chunks of data. It means that the risk of memory problems when joining 2 buckets is smaller than doing the same for 2 bigger partitions (1 partition stores all buckets) at once. Partitioned joins would also decrease the parallelization level since we would have very few tasks processing big volumes of data (1 task per partition). If you have any input, I will be happy to learn!

If you want to perform partition-wise joins, you can try to simulate it with UNION operation, a bit like that: 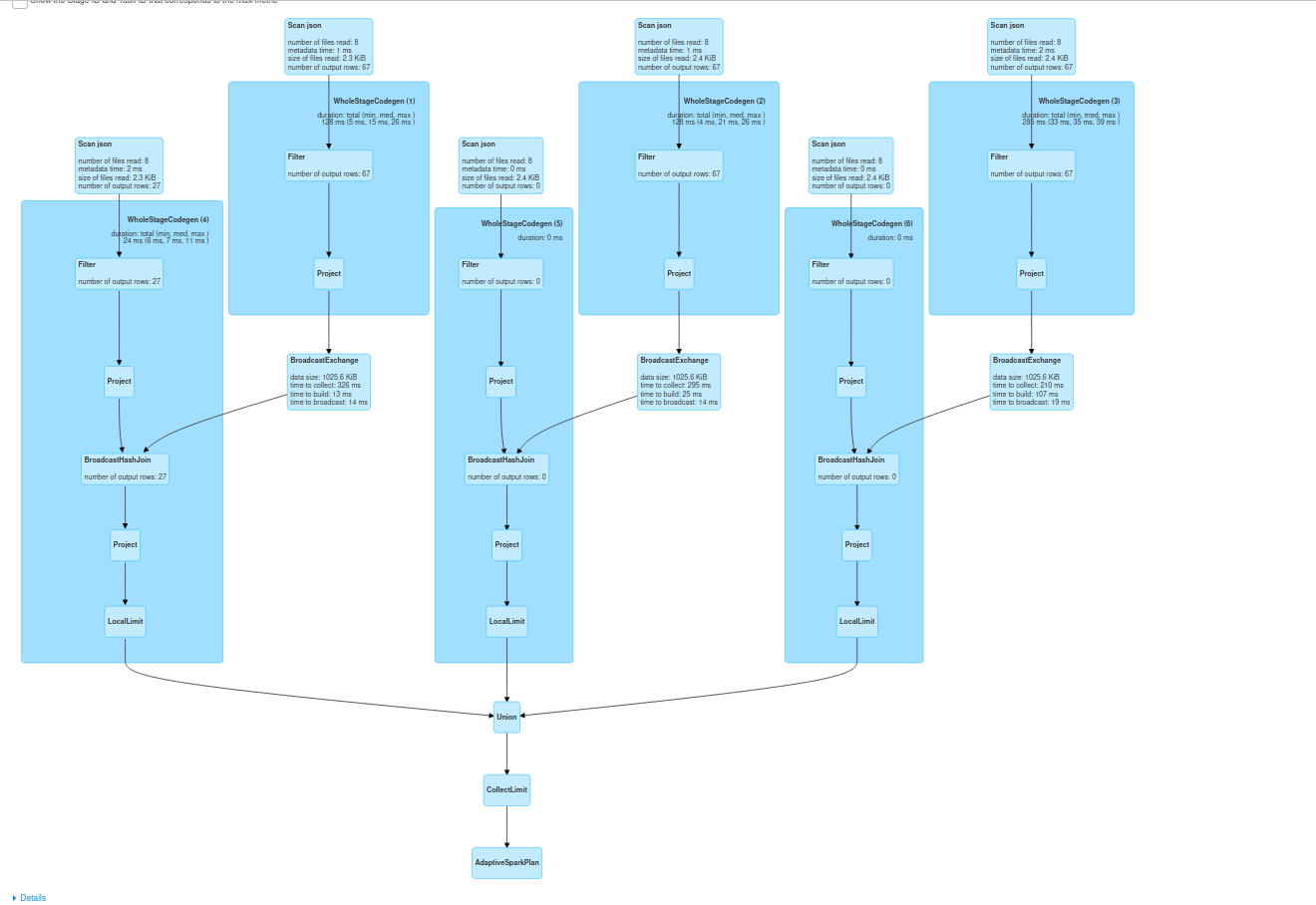 To summarize, even though Apache Spark doesn't include the partition-wise optimization, it does include the bucket-based one to perform the local joins. But it doesn't mean you shouldn't try to optimize your non-bucketed code! As you saw in the last part, the UNION operator of the partitioned datasets is one of the possible approaches. It does not guarantee better results, but it's worth giving a try if you cannot reorganize your dataset to take advantage of the bucket-based joins and when you feel that it can improve the operation.

Partition-wise joins concept exists in different RDBMS. In my new article you can see its example in #PostgreSQL and discover whether it exists in #ApacheSpark #SparkSQL ? https://t.co/tRResH3Vf3