A query adapting to the data characteristics discovered one-by-one at runtime? Yes, in Apache Spark 3.0 it's possible thanks to the Adaptive Query Execution!

I will deep delve into the AQE optimizations in my next blog posts. Here I'll present this feature from a general perspective, proving why it's...adaptive :) In the first part, you'll discover then the global presentation of the idea. After that, you will see different use cases tested by the community before the official implementation in Apache Spark codebase (!). Finally, in the next parts, you will see some implementation details and an example of the query optimized with the AQE feature.

Apache Spark, and data processing frameworks in general, doesn't know the data itself before starting the processing. Well, they can define the overall dataset size, sometimes estimate the partition size if it's explicitly used (custom partitioner, partitioned data source with statistics), eventually use the metadata from the catalog if the latter exists and can be applied, but generally, they don't know a lot about the data produced in the processing logic. In consequence, the jobs can deal with different processing anomalies, like data skews where the size of one partition is much bigger than the others.

In simple and more Spark-centric terms, Adaptive Query Execution is a way to optimize the execution plan after performing the map stage tasks. For example, if after a map-filter operation of 2 joined Datasets, the engine sees that one of the filtered sides of the join is very small, it can decide to broadcast it instead of shuffling the data.

Adaptive Query Execution is then a possibility to change the execution plan at runtime, regarding the dataset characteristics (hence adaptive).

In the previous section I already gave you an example of such optimization. But using a broadcast join strategy instead of a shuffle strategy is only one of the examples. Another one, still related to the size of the data after the map stage, addresses the number of the reduce tasks. Thanks to that, the engine can decide whether a lot of small partitions should be merged into fewer smaller ones (coalesce shuffle partitions) to improve the performance.

Another feature of the AQE is the possibility to deal with data skews. If for whatever reason a partition of one join side is much bigger than the other partitions, Apache Spark can decide to subdivide it into smaller parts to increase the execution parallelism.

All the magic happens in InsertAdaptiveSparkPlan plan optimization rule. When called, the rule uses spark.sql.adaptive.enabled configuration flag to detect whether the query should be adaptive or not:

As you can notice, the AQE will not be applied everywhere. Apart from the explicit cases, mostly related to the data writing, there is a shouldApplyAQE method that verifies some other criteria:

When one of these conditions is met, another verification is performed which can invalidate the AQE applying. Inside it, Apache Spark verifies for all nodes of the plan:

The result of this physical optimization is a AdaptiveSparkPlanExec node containing:

If everything can be dynamically optimized, the physical optimization happens.

What happens then during the physical execution? First, Apache Spark creates the initial version of the new plan from the starting physical plan. It does it in createQueryStages(plan: SparkPlan) method and the outcome of this operation is an instance of CreateStageResult(newPlan: SparkPlan, allChildStagesMaterialized: Boolean, newStages: Seq[QueryStageExec])). This createQueryStages method is called every time the plan changes, so let's stop a little and focus on it.

The createQueryStages recursively applies bottom-up on all the nodes of the physical plan passed in parameter. The transformation is different according to the node type:

The returned CreateStageResult is used later in this loop, as long as not all its children stages are computed:

As you can see, the CreateStageResult is updated every time a QueryStageExec completes, so when the broadcast or shuffle happens. When this moment is reached, the new statistics are available and can be used to create a new cheaper plan, that will be promoted to the current plan:

The new plan is built from this optimizer instance that for now (3.0.0) supports only one optimization that adds a no-broadcast-hash-join hint when one join side has a lot of empty partitions:

If the new plan has a smaller cost than the previous one, it's promoted to the current plan and will be optimized in its turn in the introduced while loop. But wait a minute, where are these all skew and coalesce optimizations I quoted before? They're invoked twice. The first place is when a new query strage is created:

As you can see, there is a queryStageOptimizerRules field that helps to create a new plan for every exchange. The second place where these optimizations are applied is here:

It's the snippet from the previously analyzed getFinalPhysicalPlan method, executed after the while (!result.allChildStagesMaterialized) { loop, so when all stages intermediate stages are finished.

To analyze what happens when the Adaptive Query Execution is enabled, let's take the following query:

The first logical plan looks like in the following schema: 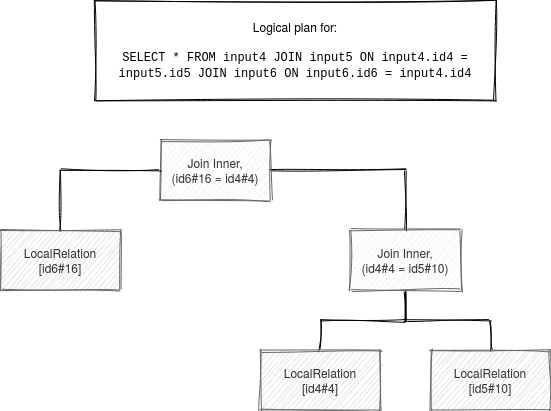 When the AQE starts, AdaptiveSparkPlanExec first transforms these nodes into a tree containing query stages: 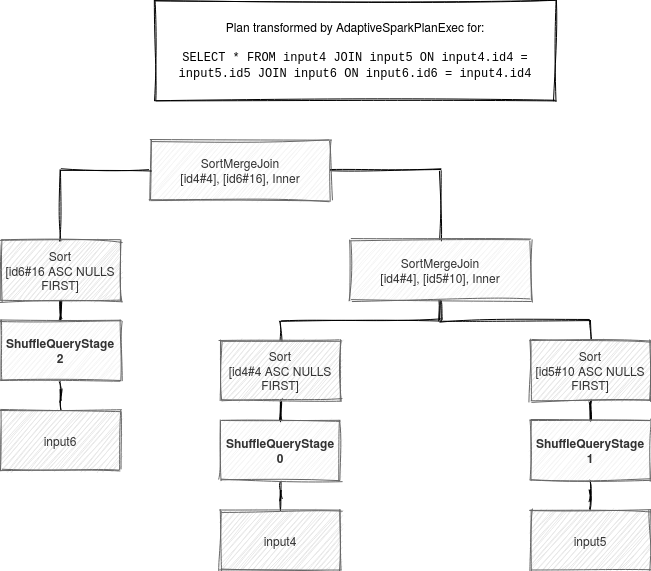 After the first transformation, the algorithm remembers all new and not resolved query stages:

The stages are later submitted for the physical execution in that snippet:

Since the stages are created bottom-up, the first submitted stages will be the leaf nodes (no child query stages). The parent stages will then execute only when their children stages finish. As soon as one stage is available (= computed), the algorithm is notified and the outcome validation is performed:

Next, in the current active logical plan, all query stages are replaced by LogicalQueryStages wrapping the initial logical node and corresponding physical node. After this step, the plan looks like:

So transformed plan has new statistics available and is later reoptimized, which can result in a completely new, pragmatic-based, plan:

And the costs of the old and new plans are compared:

And as you can see, if the new optimized plan is more optimal than the previous one, it's promoted as the new currentPhysicalPlan and currentLogicalPlan. Once all query stages are executed, the final physical plan is generated:

It was just an introduction. The Adaptive Query Execution is a more wide topic, difficult to explain in a single post. That's why in the next ones you can expect some more details about the specific optimizations resulting from the adaptive physical plan.

A query that adapts to the data during the execution? Sounds like JIT compiler but it's Adaptive Query Execution, another new feature of #ApacheSpark #SparkSQL. Curious about it? The first post of the series is online https://t.co/1vcM8TW524