In my previous blog post you could learn about the Adaptive Query Execution improvement added to Apache Spark 3.0. At that moment, you learned only about the general execution flow for the adaptive queries. Today it's time to see one of possible optimizations that can happen at this moment, the shuffle partition coalesce.

Shuffle partition coalesce, and I insist on the shuffle part of the name, is the optimization whose goal is to reduce the number of reduce tasks performing the shuffle operation. Confused? Let's take an example of a JOIN operation. It's divided into 2 major operations, one that can be made locally, at the input partitions level, and here we can put the local transformations like map or filter. This operation will produce shuffle partition files that will be used by the second major operation, on the reducer side, which will be the generation of the rows output after the join. 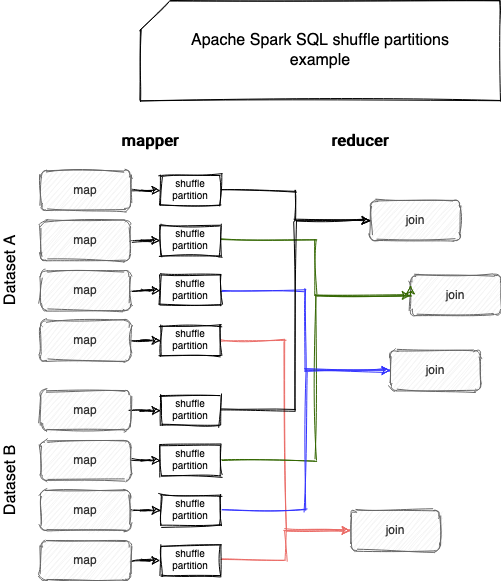 The goal of shuffle partitions coalesce optimization is to ... coalesce, so group multiple small partitions and expose them as a single group to the reducer task.

To make it possible, you have to configure 4 important properties. The first of them is spark.sql.adaptive.coalescePartitions.enabled and as its name indicates, it controls whether the optimization is enabled or not.

As you can see, it's only used when the AQE and shuffle partition coalesce features are enabled. If not, it fallbacks to the property you certainly know already which is spark.sql.shuffle.partitions.

Regarding minPartitionNum property, it defines the minimal number of shuffle partitions after coalesce. If not set, the default parallelism from Spark cluster (spark.default.parallelism) is used.

The last property is spark.sql.adaptive.advisoryPartitionSizeInBytes and it represents a recommended size of the shuffle partition after coalescing. This property is only a hint and can be overridden by the coalesce algorithm that you will discover just now.

The execution starts with some control flow verifications. The first of them is very easy to understand because it checks whether the configuration is enabled for the coalesce operation. The second one verifies another condition, namely whether all the leaf nodes are QueryStageExec operations, so either a shuffle or broadcast one. Why is it important? According to this comment, the non-respect of that can break some assumptions:

// If not all leaf nodes are query stages, it's not safe to reduce the number of
// shuffle partitions, because we may break the assumption that all children of a spark plan
// have same number of output partitions.

The 3rd check verifies whether all shuffles can have their partition numbers changed. When this property can be disabled? For example, when the user explicitly repartitions one of the shuffled datasets, which illustrates the following snippet from physical execution strategies:

The last guard condition checks whether both sides have the same number of shuffle partitions. An example of this scenario is also included in the comment:

Once all these 4 conditions are met, the coalesce algorithm is applied. The algorithm uses the statistics generated by the map stage which are included in this object:

After that, the algorithm computes the minimal number of partitions that should be generated after the optimization. It uses for that spark.sql.adaptive.coalescePartitions.minPartitionNum or the cluster default parallelism. Once resolved, the coalesce algorithm is invoked:

The coalesce operation assumes, and that also explains why we ensured before to have the same number of partition files in both datasets, that the partitions of the same index from the partitions list will be read by the same task. In other words, if dataset A and dataset B both have partitions [0, 1, 2], the algorithm assumes that [A=0, B=0], [A=1, B=1], [A=2, B=2] will be read by 3 different tasks.

Next, the coalesce algorithm iterates over all pairs (A=0, B=0), (A=1, B=1), (A=2, B=2) and verifies whether together, their size is bigger or not than the targeted size of the post-shuffle partition. If it's the case, a new CoalescedPartitionSpec is produced. If it's not the case, the iteration continues and the index of that partition will be included in one of the next CoalescedPartitionSpec: 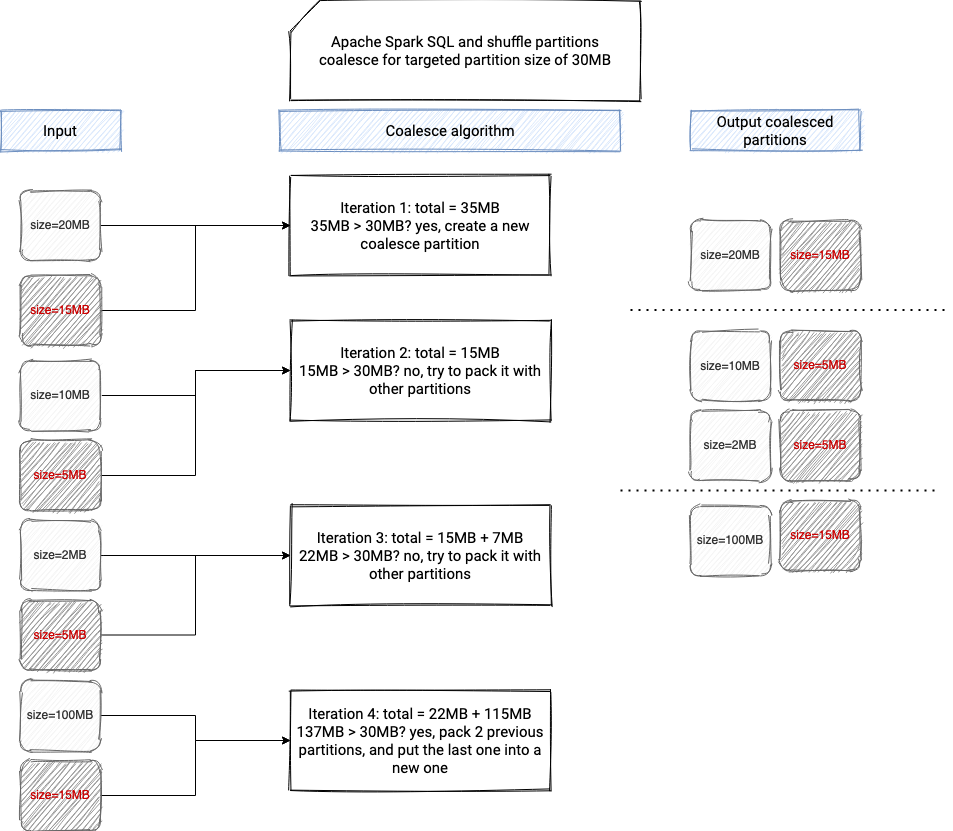 The result of this optimization is a new sequence of ShufflePartitionSpec. This sequence is later passed to the physical execution, via a new node in the plan called CustomShuffleReaderExec.

What happens after this reorganization step? The new node, CustomShuffleReaderExec stores the list of new partitions assignment:

You can see then that every assignment has a start and end index. These ranges are used to discover what shuffle files should be fetched by every reducer step, in SortShuffleManager:

And at this moment it is worth noticing that there is another optimization for the shuffle fetch operation. In the configuration you can find spark.sql.adaptive.fetchShuffleBlocksInBatch property that by default is set to true and enables the retrieval of multiple continuous shuffle block files to reduce the I/O cost of the operation.

As you can see then, and it was my initial wrong assumption about this feature, there is no physical rewriting for the shuffle block files. The optimization is then a pure logical reorganization. At this moment I didn't explore yet the way of building shuffle blocks for the operations involving shuffle (joins, group by key,...) but the fact of mixing the pairs for the blocks for both datasets, and the requirement of having the same number of them, makes me think that pre-shuffle partitions have to contain all records for the given key in the single block file, on both sides 🤔 If you have any news about that, please leave the comment. For my side, I already added a topic to my backlog and will check that later (Thank you TheEphemeralDream for the confirmation 👍).

Below you can find the code I'm using in the demo recorded just after:

Shuffle partitions coalesce is only one of the adaptive query execution optimizations. As you saw in the blog post, it helps to reduce the number of partitions, so automatically the number of tasks that will process them on the reducer side. In the next article from the series, you will learn about skewed data optimization.

Adaptive Query Execution in #SparkSQL is a set of features that can optimize the query execution at runtime. Today it's time to discover the first of them called shuffle partitions coalesce. If you want to learn more about it ? https://t.co/K3m2pAwWuB