Spark 2.2.0 brought the change of structured streaming state. Between 2.0 and 2.2.0 it was marked as "alpha". But the last version changed this status to General Availability. It's so a good moment to start to play with this new feature - even if some basics have already been covered in the post about structured streaming. This time we'll go deeper and analyze the integration with Apache Kafka that will be helpful to

This post begins by explaining how use Kafka structured streaming with Spark. It will recall the difference between source and sink and show some code used to to connect to the broker. In next sections this code will be analyzed. The second section will describe the source provider. The third part will be devoted to the offsets management. The last part will describe data reading.

Structured streaming integrated Kafka as source and sink. It means that we can read and write messages. In big picture using Kafka in Spark structured streaming is mainly the matter of good configuration. The configuration that starts by defining the brokers addresses in bootstrap.servers property. It also supports the parameters defining reading strategy (= starting offset, param called startingOffset) and the data source (topic-partition pairs, topics or topics RegEx). We can also easily manage the failure with retry parameters (= fetchOffset.numRetries, fetchOffset.retryIntervalMs).

For the writer it's much simpler. We also need to define bootstrap servers but it's the single one required property. The second entry, topic, indicates the place where the rows will be written but it's optional. If each message carries topic information, it's not required to configure this parameter globally.

If any of loaded classes don't match, Spark considers that format(...) contains the full provider's name and it tries to load it directly from the classpath. If the class is not loaded, Spark will try to get the default source (= format(...) source suffixed with DefaultSource, e.g. kafka.DefaultSource). So as you see, this resolution step is very useful when you don't want to define full class name every time in format(...) method.

Before exploring implementation details, below schema shows some of described interactions between Spark structured streaming and Kafka module: 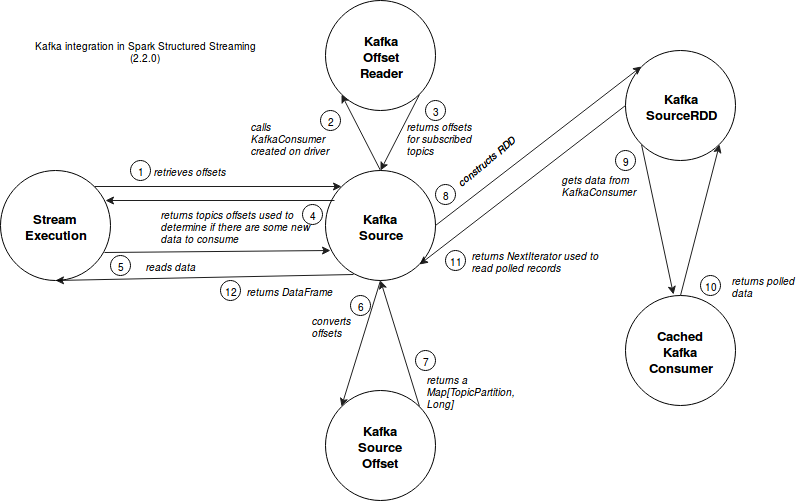 The first thing StreamExecution does with Kafka is the retrieval of offsets that, in this specific case, are the pairs (topic partition, offset). These pairs are returned by fetchLatestOffsets() method of KafkaOffsetReader that is called by Kafka source. It's there where offset-specific consumer is used. The reading consists on simple call of KafkaConsumer's methods (poll, assignment, pause , seekToEnd and position).

So constructed partitions are returned and used by StreamExecution's dataAvailable() method to check if there are new data available for reading. This check consists on simple comparison between new offset and current offset for each partition.

If new data is available, StreamExecution instance calls KafkaSource getBatch(start: Option[Offset], end: Offset) to retrieve data contained between 2 offsets. The first thing it does is the conversion of received offset to Map[TopicPartition, Long] through the call of Map[TopicPartition, Long] of KafkaSourceOffset getPartitionOffsets(offset: Offset).

After resolving partitions to read, KafkaSource creates the instances of KafkaSourceRDDOffsetRange used later as the implementation of Spark's Partition object to Kafka RDD. An interesting point to note here is that KafkaSource always tries to reuse Kafka consumers already present (cached) on executors. It achieves that in the following algorithm:

Since everything in Spark is at the end represented by RDD, KafkaSource creates later an instance of KafkaSourceRDD. Some of its implementations are closely related to things computed previously:

The partition records are returned in the NextIterator[ConsumerRecord[Array[Byte], Array[Byte]]] which next() method calls the instance of CachedKafkaConsumer that, under-the-hood, uses KafaConsumer to read data according to passed offsets. The reading consists on 2 steps:

The consistency of fetched data is strictly controlled. Every time when offset inconsistencies are detected, e.g. read offset is bigger than the max allowed offset, CachedKafkaConsumer either throws an IllegalStateException or logs a warning with messages like "Skip missing records in ....".

This post described some of information required to understand Kafka integration with Spark structured streaming. The first part recalled a little about the concepts of sources and sinks. The second part shown 2 ways to define streaming source through the format(...) method accepting as well an alias as the full class name. The next part presented how Spark deals with Kafka offsets through to offset-related KafkaConsumer instance created on the driver. The last section explained data reading part. We could see that Spark tries to reuse already created consumer by applying a specific algorithm. We could also observe that it controls every time the consumed offsets by throwing an exception or adding warning if some inconsistency is detected.