I have a feeling that a lot of things related to the scalability happened in the 3.1 release. General Availability of Kubernetes that I will cover next week is only one of them. The second one is the nodes decommissioning!

Yes, that's the first important question to answer before digging deeper into the code. Why should we manage a decommissioned node? The whys are pretty clearly presented in the design doc associated to the SPARK-20624. Holden Karau, who is the main author of the node decommissioning feature, shared a list of situations where you can need it:

The most problematic point with losing an executor is the need to recompute the shuffle or cached data. The node decommissioning feature lets you enable blocks and shuffle data migration before the node goes away to mitigate the issue.

Node decommissioning and the data

When I analyzed the node decommissioning feature, I concluded with a logical division for the node decommissioning operations. The first category groups metadata actions like the worker's exclusion from the list of schedulable resources. The second category applies to the data and concerns shuffle files and RDD blocks migration. And I will start here with the data part.

The decommissioner calls the start() method where it physically migrates the data to available peer block managers. If there is no existing peers, the decommissioner can use the fallback storage if it's enabled in spark.storage.decommission.fallbackStorage.path:

After finding the peers, the decommissioner starts the replication. A similar workflow applies to the shuffle files except that its execution is controlled with spark.storage.decommission.shuffleBlocks.enabled property. The executor later checks the migration state by continuously calling the lastMigrationInfo():

After a successful decommissioning, the executor notifies the driver with the RemoveExecutor message having the "Finished decommissioning" as the removal reason. You can find the summary of this self-decommissioning in the schema below:

Now, the tricker part, i.e. how does the decommissioning even start?! The first implemented trigger is the PWR signal. The executors and workers listen for it by attaching a listener to SignalUtils:

Both will communicate with the driver but differently! The worker will first reach the master with WorkerDecommissioning message. The master will later get all executors of the worker, mark each of them as decommissioned, and finally send the ExecutorUpdated message, one per every executor, to the driver. The driver will take the message and send the DecommissionExecutor message to the corresponding executor. Upon receiving this message, the executor starts the decommissioning process described in the previous section. The following schema summarizes these interactions: 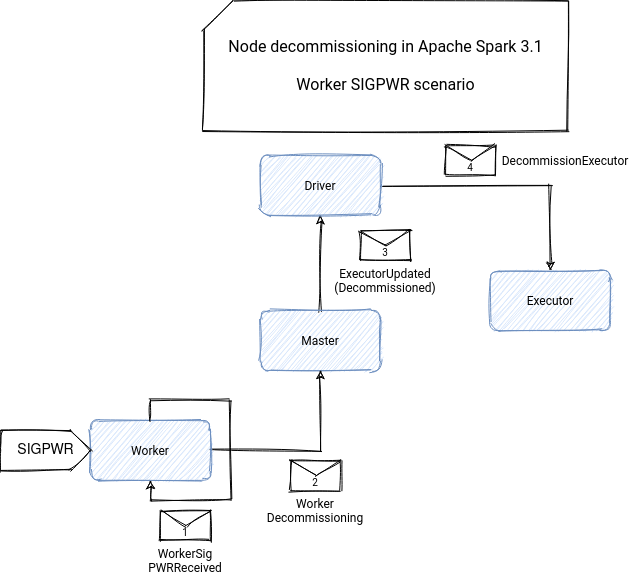 And as for the worker, an associated workflow: 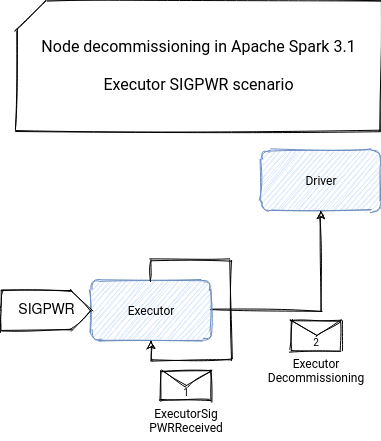 In addition to the signal trigger, in a standalone cluster you can also decommission a node from an HTTP endpoint called /workers/kill:

You can find the summary of the interactions below: 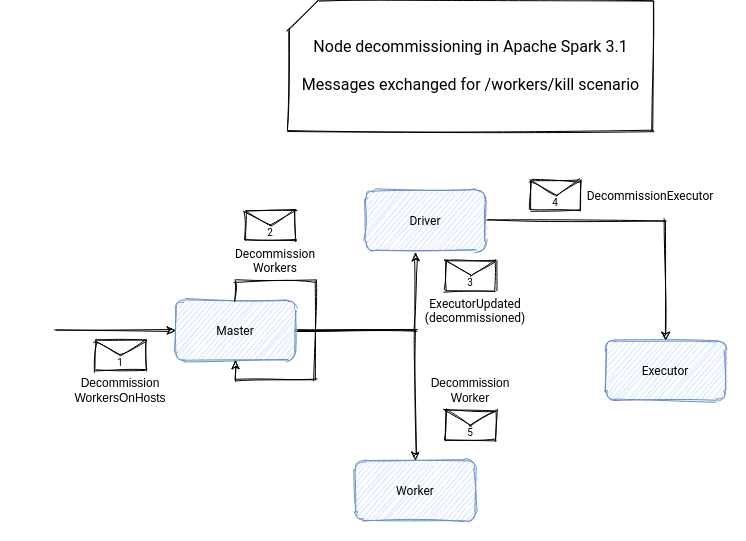 Please notice that the nodes decommissioning feature doesn't guarantee a full replication, though! If a cloud provider reclaims the preemptible or spot instance you're using, it can give you some delay before taking it back, but this delay is unaware of your shutdown process. Despite that fact, the feature implemented by Holder Karau, Prakhar Jain, Devesh Agrawal, and Wuyi is a good step forward to adapt Apache Spark to a dynamic and elastic cloud computing environment!

What can help build scalable pipelines in #ApacheSpark ? Kubernetes, cloud, but also the new feature I described in today's blog post, the node decommissioning ? https://t.co/VxthG6mn4A