Counting the number of distinct elements can appear a simple task in classical web service-based applications. After all, we usually have to deal with a small subset of data that simply fits in memory and can be automatically counted with the data structures as sets. But the same task is less obvious in Big Data applications where the approximation algorithms can come to the aid.

HyperLogLog is one of approximation algorithms that can be used to resolve counting problem and this post covers it. The first section explains the main ideas of the HyperLogLog. The second explains the role of registers. The last part contains some tests that reveal when HyperLogLog performs well and when it works worse.

HyperLogLog is an approximation algorithm, so it doesn't provide exact results. However, the margin of error is about 2% that in the case of a big dataset can often be an acceptable trade-off between the accuracy and performance. The general idea of the algorithm consists on counting the number of leading 0 in object's hash binary representation. To understand it better, let's zoom a little on the steps made by HyperLogLog:

The above points can be resumed in the following image: 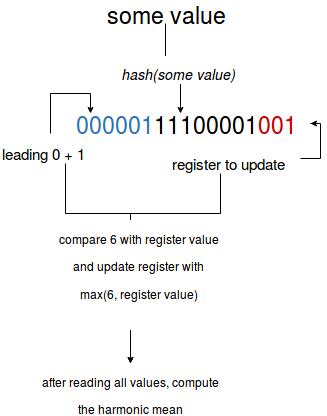 The role of registers is important. They determine the approximation error of HyperLogLog with this formula: 1.03896/√numberOfRegisters. As you can deduce more registers guarantee better accuracy. Nevertheless greater number of indexes increases the amount of memory required to approximate the cardinality (even though this amount will be still smaller as if we'd use the naive method of counting, for instance the one using set data structure).

The registers are also related to another point - hashing function. As already told, a good hashing function must guarantee even distribution among registers. It leads to the situation when each register handles up to numberOfAllElements/numberOfRegisters elements. In other case (= uneven distribution) it can lead to the presence of a large variance (outliers). A method employed by HyperLogLog to decrease this effect is the merge of values stored by registers with harmonic mean instead of geometric mean used by LogLog (HyperLogLog is an evolution of LogLog).

In order to demonstrate HyperLogLog features we'll use its version from Twitter's Algerbird library. The goal in this section is to check the approximation accuracy and the parameters influencing the results:

Counting distinct elements in Big Data applications having millions of entries can be a difficult task. Every naive method requires a lot of memory. Fortunately sometimes approximation results can be used and they're pretty well provided by HyperLogLog algorithm. It's based on the idea of bit-pattern observables and harmonic mean applied on the longest runs of 0-bits + 1 stored in independent registers. As shown in the last section, the number of the registers but also the number of analyzed values have an important influence on the accuracy.