I wrote this blog post a week before passing the GCP Data Engineer exam, hoping it'll help to organize a few things in my head (it did!). I also hope that it'll help you too in understanding ML from a data engineering perspective!

The post starts with a section dedicated to the data transformation. After that, you will find a few sections about training and evaluation stages, and to terminate, about the serving.

Let's start with data transformation. Data transformation will help prepare the dataset for training in the data science context by performing cleansing or enrichment actions. Even though it's quite obvious topic, there is one important thing to notice. The transformations applied to the training and predicted data must be the same. It seems obvious, but it can be the first reason why the deployed model doesn't work the same during the training and the validation stage. To be clear, that's not the single one, but probably, it'll be the simplest to fix.

How to ensure the same transformation logic applied on both parts of the pipeline? A common dependency like a wheel or JAR will often be enough but may require more work in the case of full-pass transformations (explained below). An alternative solution uses TensorFlow's tf.Transform object. You can export its output as a Tensorflow graph storing the transformation logic alongside the statistics required for some of them. 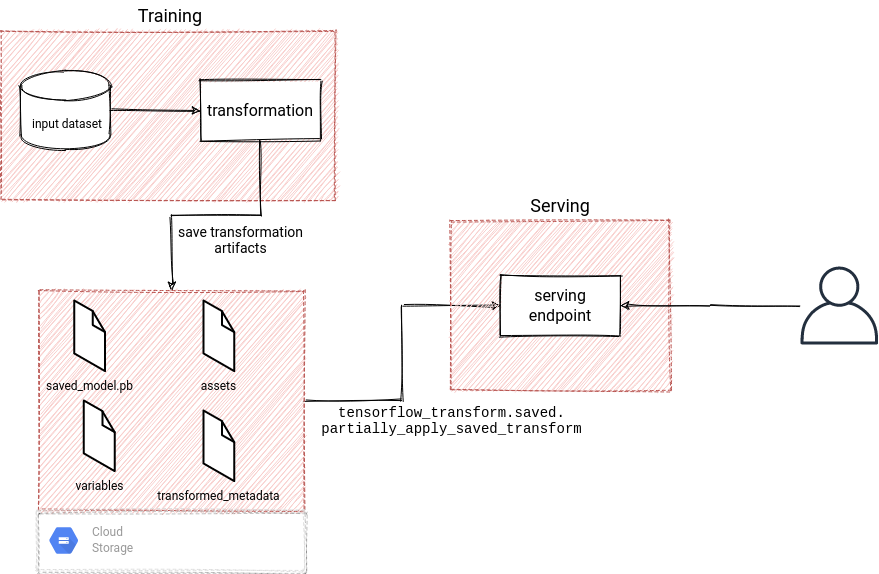 Regarding the aforementioned full-pass transformations, they are one of 3 transformation types available in feature engineering (you will find more details in the articles linked in "Further reading" section). Apart the full-pass, 2 other transformations are instance-level and window aggregations. The instance-level is the easiest one since it uses the information already stored in the feature column(s). For example, it can create a new boolean flag feature from 2 other feature columns.

The full-pass transformation is a bit more complex since it relies on the dataset statistics computed during the full pass on the dataset. An example of this operation is a normalization of a numeric feature requiring mean and standard deviation values. Doing this full pass for every predicted value could be very inefficient, hence the need to store it alongside the transformation. The same rule is also valid for the window aggregations like an average in the sliding window. Reprocessing the whole streaming history to generate it during the serving stage would be overkill. That's why this average can be generated aside by a streaming pipeline and only exposed to the serving layer.

After making the transformations, we're ready to do some training. One of the first training items that you will learn when preparing for GCP Data Engineer certification is compute environment. You can choose a CPU, GPU, or TPU-optimized hardware. CPU is quite standard, whereas GPU and TPUs are more the accelerators. GPU is the preferred hardware for matrix computations, so for the things like images or video processing. TPU is a better choice for deep neural networks not requiring high precision arithmetic. And what surprised me was the cost of TPU vs. GPU. It happens that despite an apparently greater costs, TPU - if used for appropriate workloads - can actually be cheaper than the GPUs! But keep in mind that GPU and TPU cannot be used interchangeably. Computations requiring a high precision arithmetic or a specialized C code can't be executed on TPU.

In addition to the compute environment, training also has some more conceptual challenges like training-serving skew. This skew happens when the model doesn't train with the new data used in the serving layer. It means that the model may be out-of-date after some period.

And finally the hyperparameters. Previously I presented the features, which are the dataset attributes impacting the model prediction. But they're not the single impactful element. Other ones are hyperparameters. Think about them like about the metadata of the training process. The examples are the number of epochs or the number of hidden layers between the input and output layer in deep neural networks. Modern MLOps platforms like MLFlow or AI Platform on GCP automate hyperparameters tuning by creating the experiments with various configurations.

To decide whether the trained model can be deployed, we need to evaluate it and use one of the available metrics to estimate its quality. In the listing below you can find a summary for available evaluation methods:

And the same listing but as an image: 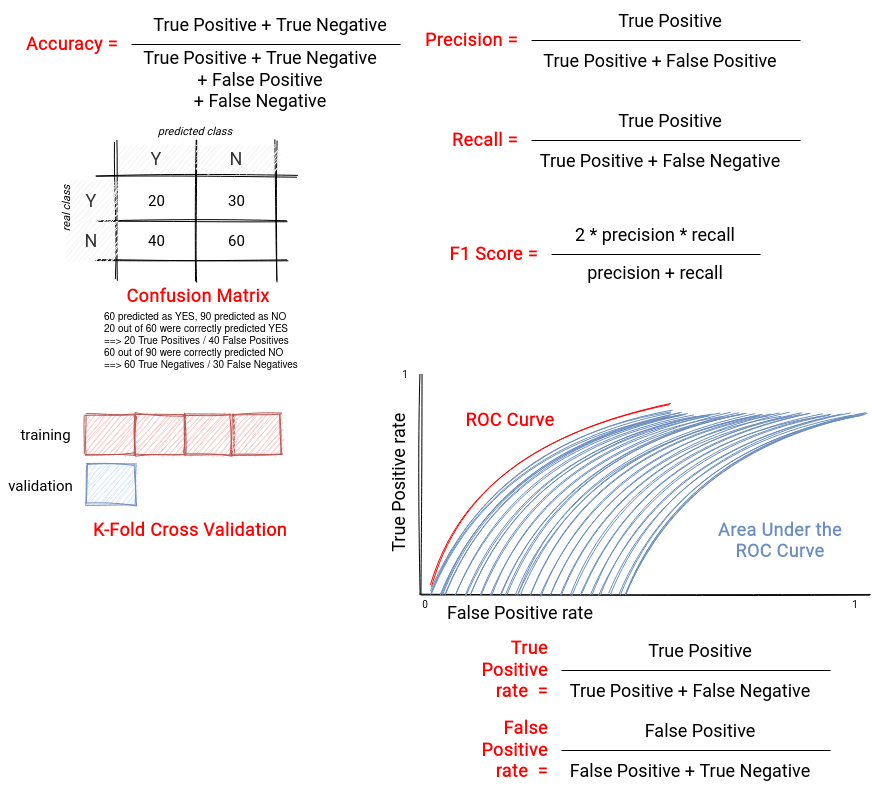 Model evaluation also helps to detect whether the model overfits or underfits. Underfitting, which is the first of 2 performance terms, occurs when the model can't learn from the data. In more format terms, we say that it can't accurately capture the relationship between the features and target variables.

On the opposite side you will find the overfitting. When the model overfits, it often means that it remembers the training data instead of learning from it. It cannot be then generalized and applied to the unseen input. But fortunately, you can do something to improve the situation:

Once trained and evaluated, the model can be finally served. What's interesting for data engineers is how to query it in batch and streaming processing. And more exactly, what are the best practices for that. GCP's recommended approach for batch processing is to use direct-model approach; i.e., downloading the model directly to the data processing pipeline. It can be further optimized with the creation of micro-batches passed to the prediction method.

For streaming pipelines, direct-model is also a recommended approach. Once again, the pipeline downloads the model and uses it locally for prediction. But there is a problem too. Streaming processing is supposed to run forever, and during the whole lifecycle, data scientists can deploy new versions of the model. The pipeline has to detect or be notified about that. And if it's something you cannot afford, it means that you have to use online approach; i.e., query the HTTP endpoint exposing the model. Here too, you can use micro-batch to improve the throughput but sending one request for multiple input parameters.

I'm pretty sure that you knew a lot of the things presented here. At the same time, I hope that you also learned something new, like me. Before preparing this article, I didn't know that TPU could be cheaper for some workloads or that we could use micro-batch for prediction! I was also very often confused about the model evaluation measures but having the visual support from this article helped my learning process. And you, there is something useful you discovered here?

ML concepts were one of the hardest things to understand in my #GCP Data Engineer exam preparation. To help myself I wrote a blog post explaining the various concepts I discovered ? https://t.co/N9qjnIpaPA