Gnocchi writes data partitioned by split key. But often such splitted data must be merged back for reading operations. This post focuses on "how" and "when" of this process.

This post explains what happens in Gnocchi when an end user requests for aggregated measures. It's composed of 2 parts. In the first one we can discover the implementation of reading data logic. The next one shows how the data is organized in local filesystem storage engine.

The reading path including some implementation details is summarized in the following picture: 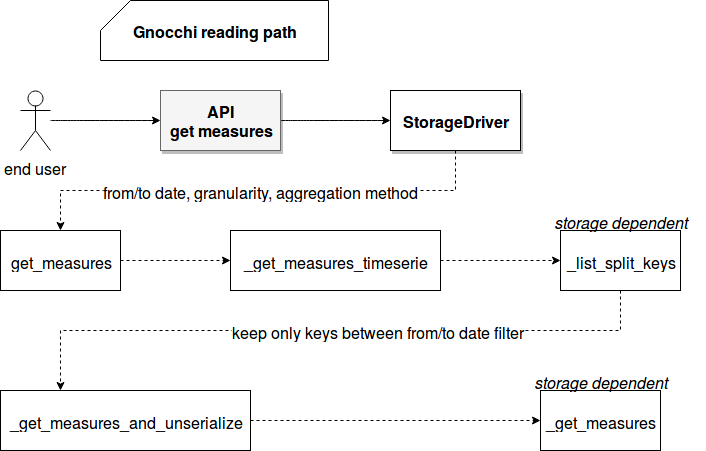 As you can see, everything starts by preparing the query context with date filters and aggregations to retrieve. Such context is passed later to StorageDriver's method responsible for getting the queried results. Split keys are involved here. The first step consists on reading all split keys belonging to given metric, the aggregation and the expected granularity. If we're supposed to store small chunks of aggregated data for small granularity (e.g. 1 sec), this operation could be the first analysis step for performance issues. The used reading method depends on the underlying storage. For the local filesystem it consists on reading and filtering all files from the metric's aggregation directory. For Redis it iterates over the registered paths.

To see the data organization, let's run the Gnocchi's Docker image and add some measures with the API:

Now we can push the measures to this metric with the following Python script:

After looking at the files organization inside /var/lib/gnocchi/d2aaaf98-617d-4f1a-bdec-23ac1463b278 we can find the files composed of: first stored timestamp, granularity and version. Such organization proves the sayings from the first section about getting all keys belonging to given granularity and filtering them later to get the data between specified time ranges:

The concept of split key makes that the aggregation results can be fetched at once. As shown in the first section, when some data is requested, the first step made by Gnocchi consists on retrieving the split keys containing the time range of the query. Only after that the data is read from the files, unserialized, merged and eventually truncated.

Another post explaining #Gnocchi internals. This time it's about reading aggregates https://t.co/sy24UATBBX pic.twitter.com/bCww0NgUGN