I wanted to write this post after the one about aggregation modes but I didn't. Before explaining different aggregation strategies, I prefer to clarify aggregation internals. It should help you to better understand the next part.

The post is composed of 4 sections. In the first one, I will introduce the main classes involved in the aggregations creation. In the 2 next sections, I will cover the creation of physical plans for the aggregation with and without the distinct operator. In the last part, I will discuss 3 different execution strategies for aggregates.

In this post I'll omit the stateful aggregation and try to describe it in a dedicated post.

The aggregation with a distinct clause is composed of 4 physical execution nodes. I will analyze them for the following query:

And a picture to summarize these steps: 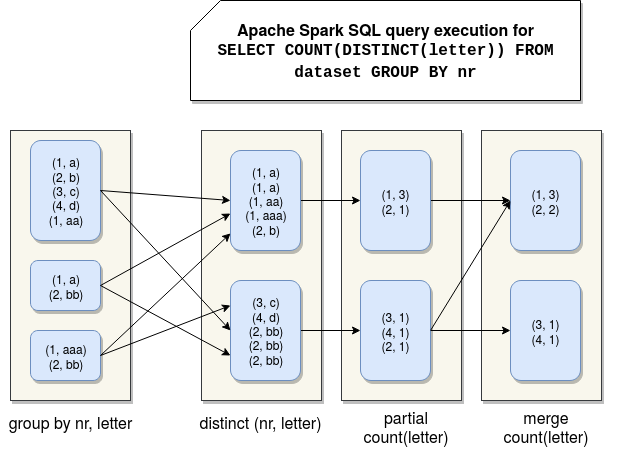 The execution plan for an aggregation without distinct operator is much simpler since it consists of only 2 nodes. I'll analyze it for this example:

When any of 2 previously presented aggregation modes is executed, it goes to a method called createAggregate. This function creates a physical node corresponding to the one of 3 aggregation strategies, hash-based, object-hash-based and sort-based. I will cover them in this section. But before, I'll introduce some common concepts.

The first strategy, hash-based uses mutable and primitive types with fixed sizes as aggregate states, so for instance longs, doubles, dates, timestamps, floats, booleans, ... - you'll find the full list in UnsafeRow#isMutable(DataType dt) method. The mutability is so important here because Apache Spark will change the values of the aggregation in the buffer directly in place. For any other type the object-hash-based strategy is used. It was introduced in the release 2.2.0 in order to address the limitations of the hash-based strategy. Prior 2.2.0 any aggregation executed against other types that the ones supported by HashAggregateExec, was transformed to the sort-based strategy. However, most of the time SortAggregateExec will be less efficient than its hash-based alternative since it involves extra sorting steps before making the aggregation. Starting from 2.2.0, if the configuration doesn't say the opposite, object-hash based approach will be preferred over the sort-based. And the configuration property controlling that behavior is spark.sql.execution.useObjectHashAggregateExec, set to true by default. To understand the difference between hash and sort aggregations, you can compare these 2 plans below for that query:

As you can see, in both cases the data is shuffled only once but for the sort-based execution, the data must be sorted twice which can introduce an important overhead regarding the hash execution.

Another interesting thing to notice is that both hash-based aggregates can fallback into sort-based aggregation in case of any memory problems detected at runtime. For object hash-based aggregation it's controlled by the number of keys in the map configured with spark.sql.objectHashAggregate.sortBased.fallbackThreshold property. By default, this value is set to 128 so it means that you will only be able to store the aggregates for 128 keys. In case of fallback, you will see the messages like:

For hash-based execution, the fallback is controlled by BytesToBytesMap class and its max capacity configuration which is of 2^29 keys.

In this post I wanted to show you some basics about the execution of aggregations in Apache Spark SQL. The first part introduced the AggUtils which is the object responsible for the creation of physical plans. The physical plans which were covered in the next 2 sections. As we could all expect, the plan for the query without the distinct operation is much simpler. Both query execution plans have things in common though like partial aggregation. I'll explain that topic more in the next post from the series. Finally, in the last part, you could learn about 3 different execution strategies. 2 of them are hash-based and use a hash map where the aggregation results are stored. The last one, and at the same time the less efficient, is sort-based and involves extra sorting steps in the physical plan.

Some time ago, I was analyzing the query plan generated by my #ApacheSpark app and found a mysterious partial operations. I decided then to investigate and today's post starts a series about aggregations in #SparkSQL https://t.co/4VgaFJqxK5