Some time ago I was thinking how to partition the data and ensure that we can reprocess it easily. Overwrite mode was not an option since the data of one partition could be generated by 2 different batch executions. That's why I started to think about implementing an idempotent file output generator and, therefore, discover file sink internals in practice.

The problem I will try to solve looks like in this schema: 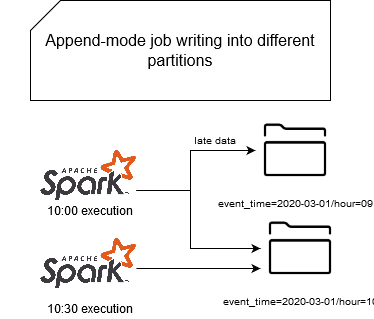 This problem can be resolved in various manners like with internal index storage that will store the generated files and delete all of them before the reprocessing. But let's suppose that we don't want to manage this extra component. Unfortunately, we cannot do that with an actual file sink because if we need to reprocess the data, it will generate the files with different names, so the duplicates. The solution that I will test here, and discover Apache Spark internals, will consist of generating the files with the same names every time. Of course, it implies that:

Even though these 2 requirements are quite strong assumptions about the processing, let's suppose that they're true. As I explained at the beginning, this article is more a practical exercise to deep delve into the file sink rather than a prod-ready solution. So, the question is how, under these assumptions, always generate the same files?

As you can see, every time something happens with a task or a job, FileCommitProtocol invokes its OutputCommitter companion. You don't see it in the code because I should insert a lot of lines, but believe me (you can check if you want ;-) - HadoopMapReduceCommitProtocol.scala) that FileCommitProtocol acts more like an adapter of Hadoop writer to Apache Spark logic. You can see it for instance here, with dynamicPartitionOverwrite flag enabled:

To sum-up, in case I was unclear, FileCommitProtocol is the wrapper that controls data organization logic. OutputCommiter is the class responsible for physical data writing.

Why new file for reprocessed job?

Before we go to the part of implementation, let's stop a while and answer why a file generated for the same input dataset, with the same business rules, has a different name? The answer is hidden in InsertIntoHadoopFsRelationCommand's run(sparkSession: SparkSession, child: SparkPlan) method when the FileCommitProtocol is initialized:

An intrinsic part of the file name is the job id which, as you can see, is every time a random UUID. And that's the reason why HadoopMapReduceCommitProtocol which is one of the implementations of FileCommitProtocol, generates different names:

Let me show you that I'm right by overriding the jobId at runtime:

Finally, the names generated by my hacked code were:

What is this c000 at the end? It's the number of the file written by a given task. A task can write multiple files?! Yes! Apache Spark SQL comes with a property called spark.sql.files.maxRecordsPerFile that defines the maximal number of records per file. It's optional and by default set to 0 so it means that there is no limit but if you want to control the number of items in every file, it can be an option.

So, to guarantee the same name of the generated files, under the assumptions from the beginning of this blog post, we simply need to overwrite the job id. FileCommitProtocol.instantiate mentioned in the previous section is called on the driver. We could then use the same method we use often for Docker containers to adapt them to the executed environment (prod, staging, qa, ...) with environment variables. Below you can find my least-effort FileCommitProtocol class:

Please notice that I'm simulating here the environment variables with a custom class because it's easier to make the tests executable. But in the test already you can see that despite the fact of executing the same code twice, in append mode, we always get the same outcome.

If you think that my assumptions from the introductory section are strong, I agree with you. It's hard to guarantee the same data generation logic across reprocessing. We can also have a case when some data will be expired in the source and therefore if we control the maximal number of records written per file, we can still end up with some data quality issues (phantom data in the files that shouldn't exist). Despite that, I hope you could see another way to enhance Apache Spark with your custom behavior.

How to generate files with the same names in #ApacheSpark #SparkSQL, even in case of reprocessing? To see that, in my new blog post, I explored committers and commit protocols https://t.co/fWMAg2lzA6