In my previous post I explained how Apache Spark can reorder JOINs based on the logical plan. Today I'll focus on another aspect of reordering which uses cost estimation for the proposed plans.

I've already covered cost-based part of Apache Spark by the past in Spark SQL Cost-Based Optimizer post so here I will really focus only on the part related to the JOIN operation. And I will start with a short section on the high level view of this optimization. In the next one I will present the algorithm used to figure out the most effective query plan. Before terminating this article, I will show some code snippets proving the optimization.

Cost-based reorder join uses cost related to the query and that's the reason why its execution is conditioned. it's chosen when all of the following requirements are met:

The execution flow starts with a standard pattern matching on the query plan nodes. If one of them matches, the reorder(plan: LogicalPlan, output: Seq[Attribute]) method from CostBasedReorderJoin's is invoked. Inside this method, Apache Spark first retrieves all tables and conditions involved in the query. If the reorder join can be applied (cf: see the list with 4 bullet points from the previous section), the framework transforms the initial plan with the help of a dynamic programming algorithm from JoinReorderDP class. As for any dynamic programming algorithm, the idea here is to divide one big problem into smaller ones and use their results to solve the overall problem.

From a high-level view, the algorithm starts by decomposing the plan into 2 main components: sources and join conditions. Later it starts by initializing the first level of the possible plans by putting all sources at the same level like [(source1), (source2), (source3)]. Such prepared input is later passed to searchLevel(existingLevels: Seq[JoinPlanMap],conf: SQLConf, conditions: Set[Expression], topOutput: AttributeSet, filters: Option[JoinGraphInfo]) method which is responsible for the generation of the next level's combination. Inside, the algorithm tries to figure out the most optimal join structure by testing all possible join combinations at every level. So for the first execution, it will compare the joins between source1 - source2, source1 - source3 and source2 - source3.

You may think now that illogical joins will be generated but that won't happen. Join candidates are passed to a method called buildJoin. It returns None if both query sides cannot be joined. The "joinability" is conditioned by the overlapping (both sides are different) and at least one join condition applicable to both sides:

When both sides can be joined, the algorithm estimates their cost and updates the logical plan stored for a specific combination of tables (items in the snippet):

The cost formula is rows * weight + size * (1 - weight) where the weight is defined as spark.sql.cbo.joinReorder.card.weight property.

At every level the algorithm will keep only the best plan for each combination of items and at the end compose the final plan from them. Every iteration doesn't take all prior plans. The part of the algorithm responsible for selecting the plans computed previously looks like:

As you can see, for the level 3, only the first 2 levels will be used.

Even though I pointed out some methods involved in this algorithm, I beat that it's still a little bit mysterious. To understand the idea better, let's imagine 4 tables, a very big one (5000 rows), a big one (1500 rows) and 2 small ones (respectively 800 and 200 rows). We want to join them that way:

For the sake of simplicity, I will use table aliases in the rest of this part, so vb will stand for very_big_table, b for big_table and so on.

Below you can find the final result of the transformation without the intermediary steps that I will detail just after: 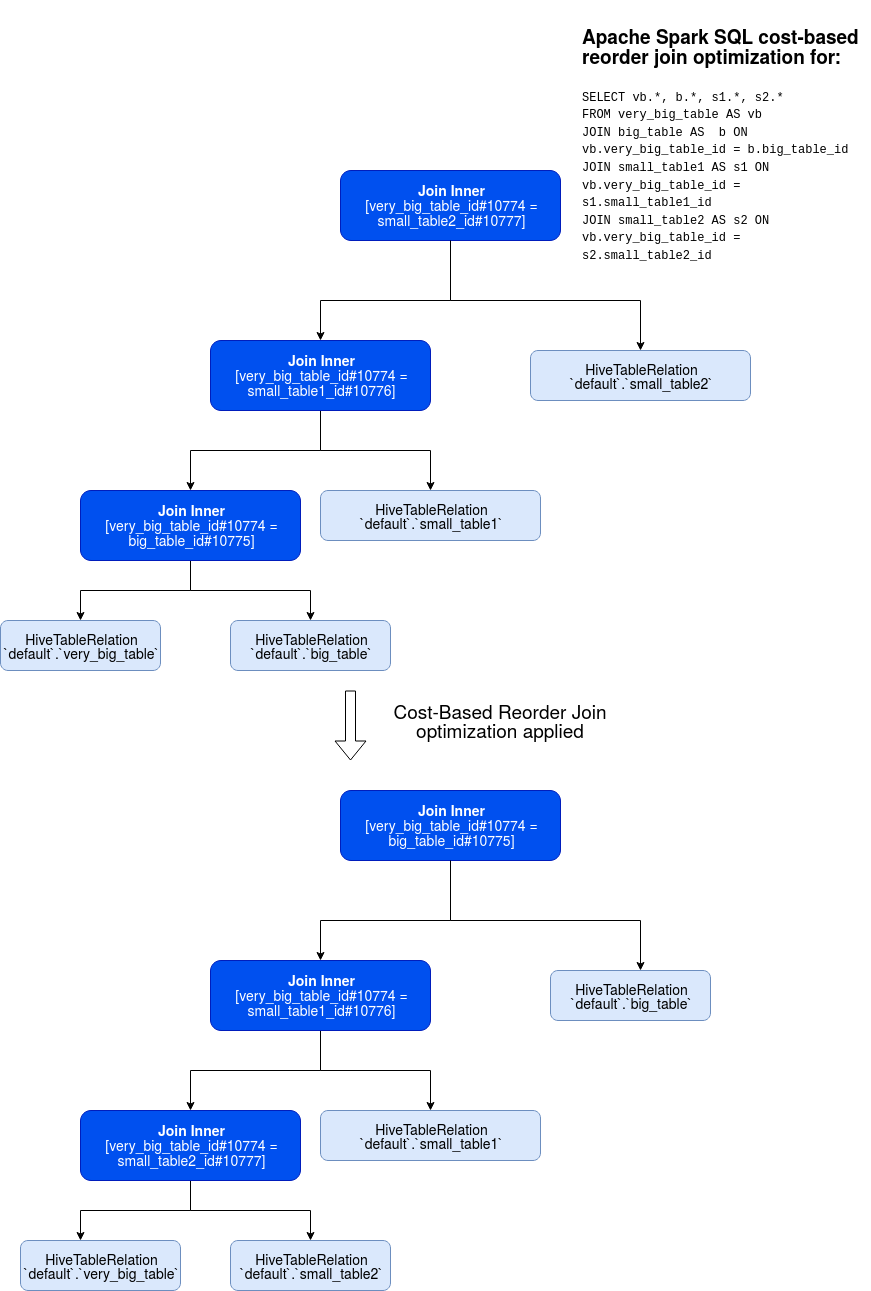 As you can see, in the analyzed query, Apache Spark starts by joining the 2 biggest tables whereas, in its optimized version, it does the opposite and joins the smallest tables first. It can be explained by the dynamic programming algorithm executed in these steps:

In this initial stage, the algorithm retrieves all tables involved in the join as well as the conditions used in the joins. It also tries to find star schema patterns but for the sake of simplicity, I will present star schema optimization in one of the next articles. Four our test query, the setup will produce 4 tables, 3 conditions and the starting (0) level of combinations:

As you can see, the combinations already tested like (vb, b) are omitted for the subsequent items. This behavior is controlled here (see "Both sides of ..." comment):

Invalid pairs are of course skipped. The result of this step looks like that:

The 2nd level generation takes all results from the previous step and combines them, still by keeping the cheapest option as the output. In other words, the algorithm combines all basic joins and figures out the cheapest combinations. In the following picture, you can see some of the combined plans at this stage alongside their costs: 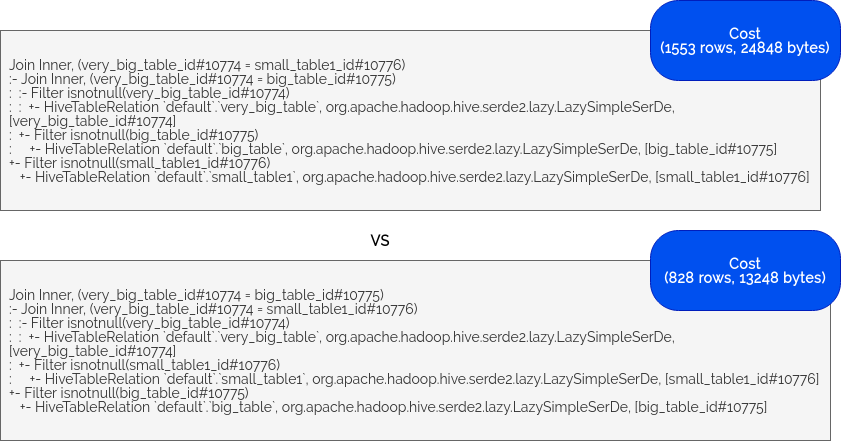 That's the final step which starts by comparing the values from the setup stage [(vb), (b), (s1), (s2)] with the pairs generated before. It happens because of the else side:

At the end, the chosen plan is first transformed to an intermediary node represented by OrderedJoin class which, before leaving the optimization logic, is transformed back to Join node:

Why this intermediary format? I found the answer in Fix recursive join reordering: inside joins are not reordered ticket where the purpose of OrderedJoin is defined as:


In join reorder, we use `OrderedJoin` to indicate a join has been ordered, such that when transforming down the plan, these joins don't need to be reordered again.

Before terminate, let's see some code. In this part I took the example explained before, ie. 4 tables, 1 very big, 1 big and 2 small. Before executing the joins, I compute the statistics to give a little bit more context about the tables to the optimizer. In the final assertion, you can see that the CostBasedReorderJoin logical rule was applied. I won't recall here the transformed plan since it's the same as in the previous part:

In the snippet I use column-based statistics (FOR COLUMNS ${id}). That's because they give a better accuracy for the optimization. Thanks to them, Apache Spark can better estimate the size of each table by taking the average size of the column directly from the data catalog. If column statistics aren't computed, the framework simply takes a default size for given column type. Despite that, CBO will work for both cases (with/without column stats).

Cost-based join reorder is a very powerful tool in Apache Spark logical optimizations arsenal. It uses real physical information about the data to propose the most optimal query execution time. Thanks to the dynamic programming algorithm based on the "Access Path Selection in a Relational Database Management System" paper, Spark can choose the best plan and override the analyzed plan with it.

The second part of my join reorder series in #ApacheSpark #SparkSQL is online. Today it's time to focus on its cost-based part ? https://t.co/Hu7ptUuA6P