I didn't know that join reordering is quite interesting, though complex, topic in Apache Spark SQL. The queries not only can be transformed into the ones using JOIN ... ON clauses. They can also be reordered accordingly to the star schema which we'll try to see in this post.

Star schema is a data modeling approach which identifies 2 kinds of source tables called dimensions table or fact table. The fact table stores the information referencing parameters stored inside dimensions tables. A popular example to illustrate that uses sales information. In that context, the fact table, so the table with events or observations, contains all sales made for a particular store, by a given employee, for a particular product(s) and at a specific date (dimension tables) by a specific customer. The difference between fact and dimension tables is that the dimension tables usually contain less data. You can see that by analyzing the sale date table. As you can deduce, one or multiple orders can be made for one specific day. Star schema can be easily summarized as: 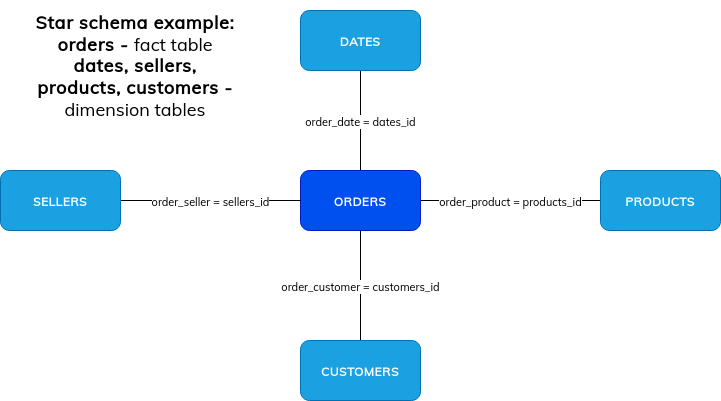 Internally, the class responsible for star schema optimization is org.apache.spark.sql.catalyst.optimizer.StarSchemaDetection. It exposes 2 methods, findStarJoins(input: Seq[LogicalPlan], conditions: Seq[Expression]) responsible for a sequence of LogicalPlans where the head corresponds to a fact table and the rest to all involved dimension tables. The second exposed method is reorderStarJoins(input: Seq[(LogicalPlan, InnerLike)], conditions: Seq[Expression]) that reorder joins based on heuristics when CBO is disabled. Here, I'll focus on findStarJoins because under-the-hood reorderStarJoins uses it to figure out the fact and dimension tables.

findStarJoins considers that there is any possible star schema if there are at least 2 joined tables having counted rows number and being the logical plan nodes without children. In other words, anything else than *Relation or *RelationV2 will be invalid. Among the examples of valid nodes, you will find for instance HiveTableRealtion or DataSourceV2Relation. To find all eligible implementations, check the children classes for LeafNode.

Once all these criteria are met, star schema detector sorts all tables in descending order by the number of rows. Later it checks if the 2 biggest tables are sufficiently different to be involved in a star schema. The sufficiency is controlled by table#2 rows count > table#1 rows count * spark.sql.cbo.starJoinFTRatio. It means that if the number of rows is comparable (10% difference, e.g. 100 rows for the biggest and 90 rows for the 2nd biggest table), then the star schema won't be created.

But since we want to understand star schema optimization, let's suppose that the difference is big enough. The next step of the algorithm consists of finding all ON clauses joining the fact and dimension tables. Once this is done, the engine checks again the availability of the statistics. This time the check is made on the columns used in join operations on the dimension tables side. Column statistics are represented by this class and as you can see, they contain basic math statistics but also more advanced information like values distinctiveness or distribution:

If at least one column from the join doesn't have generated statistics, the star join will be aborted. Otherwise, the final filtering happens. In this stage, the algorithm filters are joins that are not equi-joins, so it will keep the queries like JOIN x ON x.id = y.id and not the queries like JOIN x ON x.id > y.id. At the same time, the algorithm ensures that the column from the dimension table is unique. It means that the relationship between distinct and total number of rows fits into abs((# distinct/# all) - 1) <= spark.sql.statistics.ndv.maxError * 2 where the maxError property is the max estimation error allowed for HyperLogLog++ algorithm during the column statistics generation.

If after the last filtering there are at least 2 dimension tables, they're added to the fact table and returned as the final sequence:

Star join optimization is a part of CBO reorder join covered previous week. That's the reason why to show you how Apache Spark handles star schema optimization, I will use this short video with debugging code for: 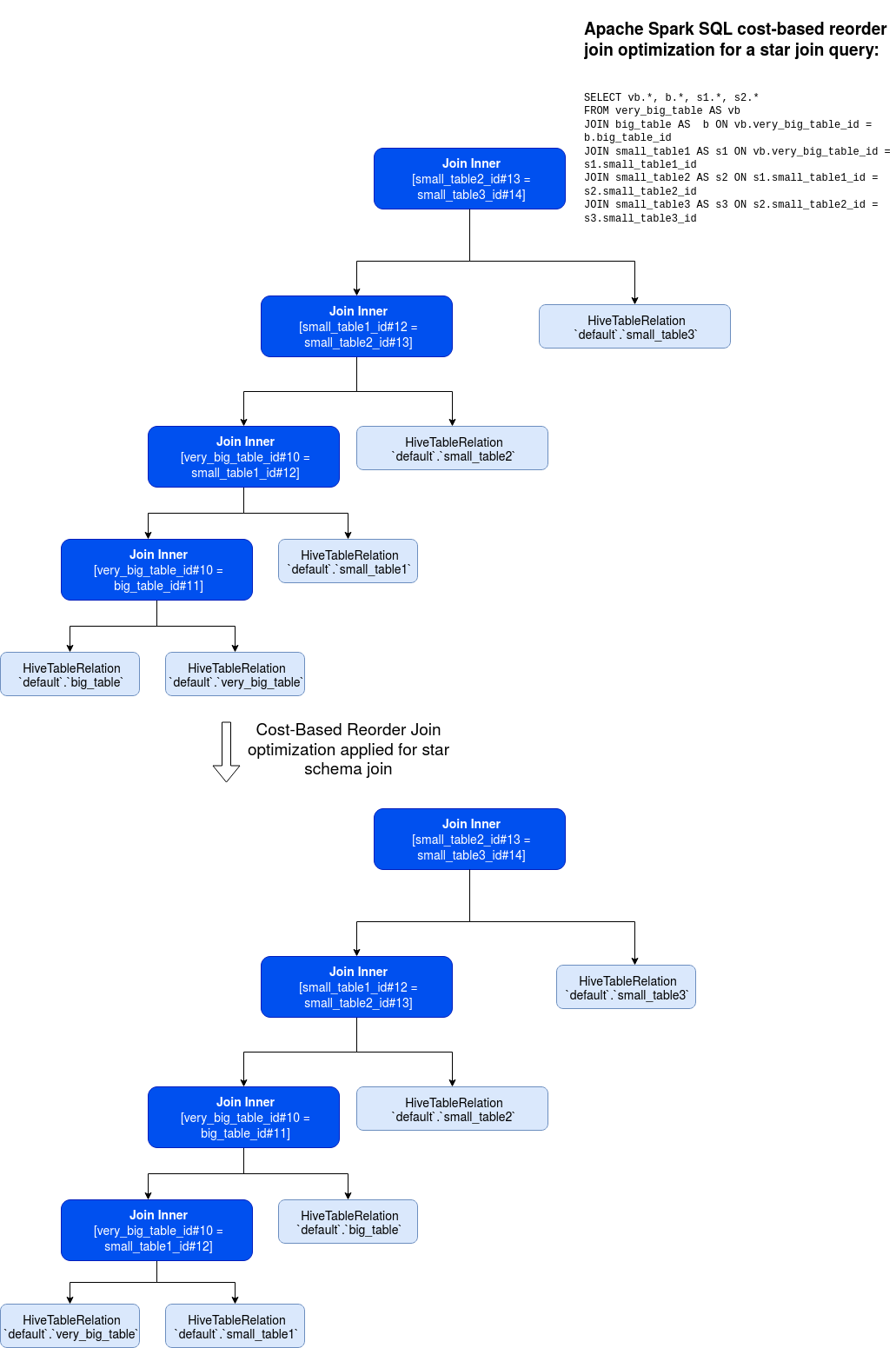 Regarding our star schema optimization, please check this short video:

Star schema detection is included in the reorder join optimization. Its implementation uses statistics to figure out the biggest tables involved in the query. After sorting the tables, it finds the fact and dimension tables and the tables not being part of the star schema and passes all of that to the reorder join algorithm. The algorithm uses the dynamic programming algorithm covered last week in Reorder JOIN optimizer - cost-based optimization to reorder joins in the optimized plan. It will also apply to the not CBO-based reorder but it will be used only when the statistics are computed for every eligible table.

The final part of my #ApacheSpark #SparkSQL series about join reorders is online. This time, it's about star schema optimization ? https://t.co/y4yq67n69Y