I'm happy to complete my quest for data engineering certification on top of 3 major cloud providers. Last year I became AWS Big Data certified, in January a GCP Data Engineer, and more recently, I passed DP-200 and DP-201 and became an Azure Data Engineer Associate. Although DP-203 will soon replace the 2 exams, I hope this article will help you prepare for it!

It didn't change a lot regarding my motivation for passing GCP Data Engineer earlier this year. After working for almost 1 year on 2 Azure data projects, I was hungry for discovering other data services. I had a chance to implement data pipelines on Databricks, orchestrated by Data Factory, for the data coming from Event Hubs and Data Lake Storage, all deployed from Azure DevOps. Unfortunately, I didn't have a chance to work on Synapse Analytics or Stream Analytics. And since both are the services I wanted to discover, nothing better than passing a certificate if you can't find the project ;).

Besides, I also wanted to measure an effort needed by an AWS and GCP certified user to learn the concepts of another major cloud provider.

And more from a personal standpoint, I challenged myself to pass AWS, GCP, and Azure data engineering certifications within 2 years. All started last year in January with AWS Big Data specialty and ended a few weeks ago, in May. Challenge completed!

I started the preparation by passing through DP-200 and DP-201 learning paths, available for free on Microsoft Learning. It's a good starting point that will show you the services and data aspects you should focus on. Like for AWS and GCP, I took handwritten notes because I realized that I learn things easier when I first write them down. You can see an example of such notes below: 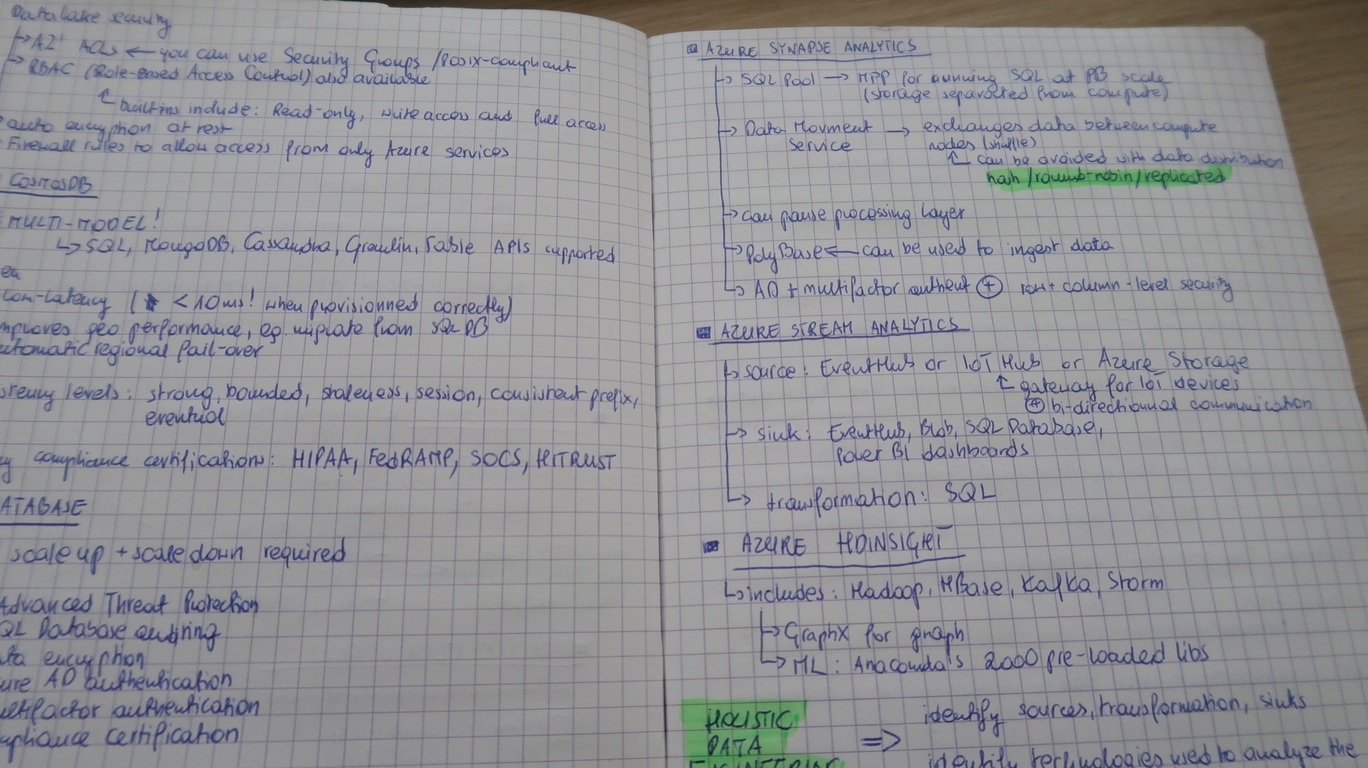 The learning paths are great, but they didn't cover all I wanted to learn while preparing for the exam. That's why I identified and prioritized the services to learn as soon as possible from the Azure documentation pages. And guess what? I also took the notes! But this time, I was able to organize them in "sections" in my notebook, like here with the 2nd part of Event Hubs: 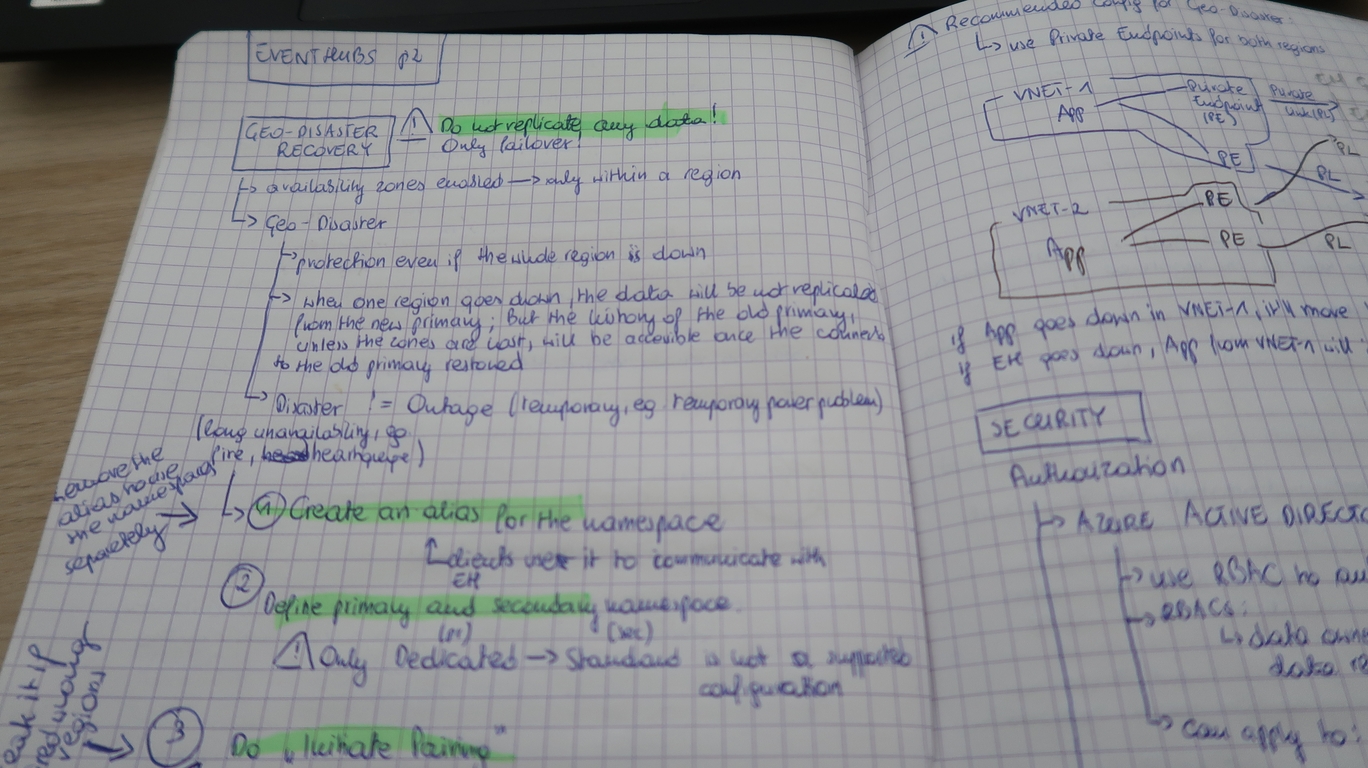 I was doing this during the first 2 months of my preparation, 1 or 2 hours every evening and a few hours on weekends. One month before the DP-200, I started to look for practice tests to spot my weaknesses. Even before subscribing to the exam, I saw a promotion on Whizlabs and benefited from it to buy DP-200 and DP-201 practice tests. I also bought 4 tests on Udemy but among them I can only recommend "Microsoft DP-200 and DP-201 Practice Tests" by Milan Jugovic. And since I was a bit disappointed by the remaining 3 and didn't feel comfortable enough, I also took MeasureUp tests. And it was the best choice I made because these tests not only have some unique questions but also propose their different types, like "fill the gap", "propose the ordered list of steps to do sth", ... Something you can't find on Udemy or Whizlabs.

Finally, I also wanted to vary a bit with my previous preparation processes and took Microsoft training thanks to the partnership with my previous company. A great plus is the possibility to interact with highly skilled instructors. However, my goal was to get a deep insight into the services and anyway, I had to spend some time on my own by playing with the resources and the documentation.

During my preparation process, I was a bit deceived by the practice tests from Udemy, except the one quoted before. Some of them had the same questions, some of them didn't have clear explanations, and in the end, I was less confident than before taking them! That's why I was happy to find and order the MeasureUp tests. Even though they were more expensive than the rest. Except for the higher quality of the questions, they also provided a more realistic exam experience. So if you have never passed a Microsoft exam, it's a good way to avoid any surprise at the D-day.

Also, do not forget to practice. The learning paths have some labs that will help you see and understand the described concepts. And besides, the documentation has quite clearly explained How-to guides.

But the most crucial tip I can share is to find your learning path. Above I described what works good for me, but maybe it won't be your case. And if no, I'm curious to see what it is! Wishing you good luck with the exam, I'm eager to read your exam preparation tips in the comments! 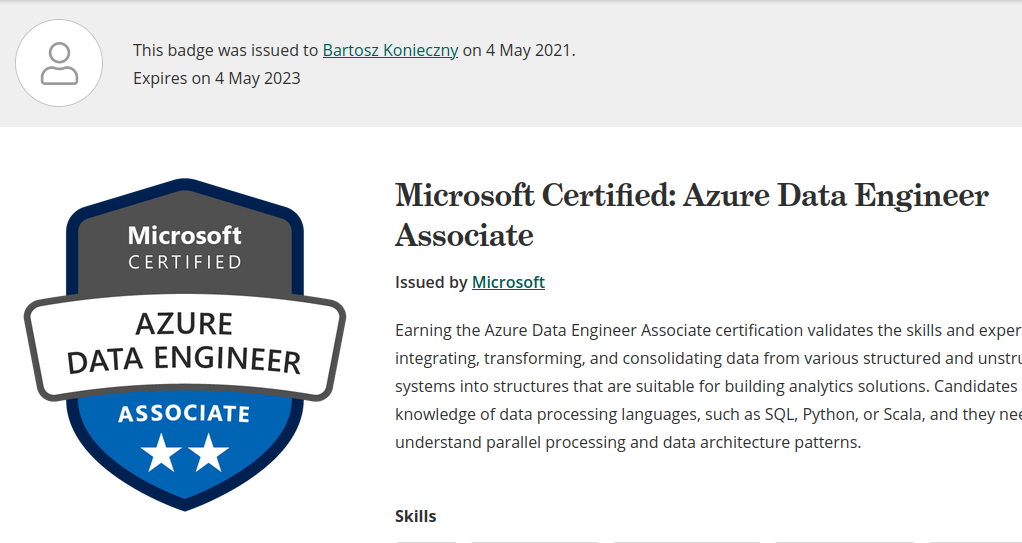