Since the gain of popularity of cloud operators, serverless processing became one of serious alternatives to the cluster-based data pipelines. It's often cheaper to have event-based applications than different processings in the clusters. However, using serverless (and not only) in distributed and stateful computing can sometimes be difficult. But often one property can help in a lot of problems - idempotence.

The serverless processing became popular thanks to cloud providers as AWS or Google. Unlike classical approach of data processing, the serverless doesn't take care of physical servers. Serverless functions are executed during the computation time (AWS limits this time to 5 minutes) somewhere in the cloud. Once the computation ends (or timeout is reached), they terminate and the used resources are freed. So the users don't need to care about the hardware installation. Often one of rare hardware considerations is the definition of expected amount of memory to use.

As it's easy to deduce, the serverless processing is by definition stateless - we can't store a state in memory because every time given function can be called on different server. But in the other side, it's possible to store the state in external storage with fast access characteristics (e.g. key-value storage).

Another important property in data processing is the idempotence. Simply speaking, we could tell that one function is idempotent if for multiple calls with the same arguments it always returns the same results. Formally speaking we can write it as: f(x) = f(f(x)). For instance, the function returning absolute value of the argument is idempotent: f(f(f-1)) will always be equal to 1. In the other side, the function returning random number is not idempotent.

In programming often we encounter the idempotence word in the context of RESTful services. For instance we have a client sending 10 consecutive DELETE requests to an endpoint. The first request will delete given resource, while subsequent ones will not. However, the DELETE operation is considered as idempotent since the state of the server doesn't change. For all 10 requests the server doesn't store deleted resource.

Another example of idempotence can be found in messaging. Idempotent messages are the simplest way to deal with duplicated messages. However, not all consumers can be idempotent. The most speaking example of that is money transfer request. If, by mistake, a message of crediting an account is sent twice, the client's balance will be credit twice and the bank will lose the money. The same problem occurs for withdrawal but in such case the client is losing.

The last but not the least point about idempotence concerns storage layer. If adding the same record multiple times produces at the end 1 new line in the database, we can consider the storage as idempotent. The example of this type of storage can be key-value data store where inserting new element for given key will always override the previous one. The counterexample of data storage idempotence is a relational database with auto-incremented column as primary key. In such case the fact of inserting given record several times will always add new line to the table.

Above theoretical introduction should help to understand the context. Our imaginary application collects the stats from the runners. The stats are sent by some physical device every 30 seconds. The message has JSON format and looks like in the following snippet:

As you can see nothing strange or complicated. The goal of the application is to consume the message and derive from it the information valuable for the user. We'll face 2 problems: message sent more than once by the device and processing unexpected crashes. The architecture is presented in the following diagram in the example of AWS (disclaimer - the architecture is given only to provide a context for the exercise of enhancing consistency, it's clear that it could be done in several and better manners): 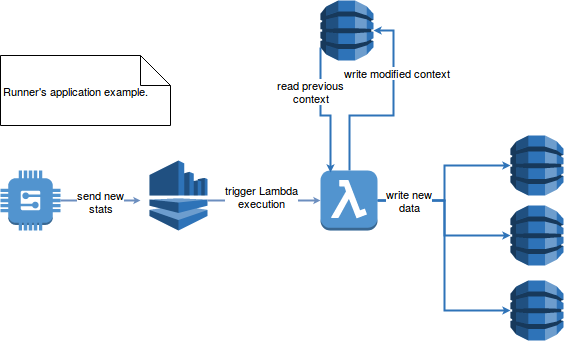 The Lambda function first retrieves previous execution context with the data required to generate new results. Thanks to this context the function sends updated context to the context table and generated stats to the remaining 3 tables representing:

As we can see, this application risks some issues. The first potential problem is inconsistent context. The inconsistency can occur in the case when the new context is saved and the rest of processing fails (e.g. because of Lambda execution timeout). The second problem can occur when the same message is mistakenly sent more than once by the device. Even if there is no processing issues, the final result will be inconsistent. Another problem can be caused by the network issues. Let's imagine that the message A is sent before the message B but the latter one arrives first to the Kinesis stream. If we don't take this complication into account, at the end the user can see his distance and exercise time decrease (= the last message always wins).

These problems can be eliminated in different ways but the simplest ones are: correct algorithm (steps, paradigm) and idempotent data storage. Let's explain:

To resume, the aggregation application's algorithm looks like in the following plan:

The analyze application with defined processing looks like in the snippet below:

Nothing complicated and it was the goal. Now we can see the objects involved in the processing (stores and messages):

Here too we see any complication. The tests were written in similar, self-explanatory spirit:

The idempotent operations and data storage can help to write simple and functional data processing code. As we could see above, the idempotent function guarantees the same processing results for given input message. It's more difficult to achieve for the stateful applications since the context must be written in correct order regarding to the processing. But idempotent function is not the single requirement. In order to work we'd also be able to store the computation results in idempotent manner - i.e. the consecutive writings of the same message should always produce 1 and the same result in the data store.

This post gives an example on how to use idempotence in data processing applications in (by definition) stateless serverless functions. But it also emphasizes the importance of idempotent operations and gives some simple pattern to the work with stateful operations thanks to this property.

Some thoughts about the importance of idempotence in serverless stateful processing in a sample app https://t.co/qFZVVXgBYI