Sequential writes made their proofs in distributed data-driven systems. Usually they perform better than random writes, especially in systems with intensive writes. Beside the link to the Big Data, the sequential writes are also related to another type of systems called log-structured file systems that were defined late 1980's.

Before talking about sequential writes, we'd begin by recall 2 units impacting writing data on flash disks: block and page. A block is the smallest unit that can be erased. In the other side, a page is the smallest writable unit. So to tell simply, when we write a new file, we write the pages and when we remove one, the work is done on blocks.

With this short recall we can now see what happens for sequential writes. A sequential write occurs when the block written by given operation directly follows the last block of previous I/O operation. Thus as we can correctly deduce, the data is written per block basis. It guarantees a good write performance as well for file creation and removal operations.

It's not the case of random writes where the pages are written sequentially but throughout the blocks. Thus one block can store the data belonging to 2 or more different files. As you imagine, it makes the I/O operations more complex - especially for the removal when the erased block contains both valid and invalid data. For this case, the valid data must be moved to other block. Since the sequential writes work per block, most of time there is no need to move parts between blocks.

Another difference concerns classical magnetic disks. In these traditional disk-based systems the random writes are based on "seek-write-seek-write" pattern. Each seek takes about 10 ms and since random writes make a seek for each write, this operation automatically takes longer than sequential one where seeks don't exist. The difference is less visible for the case of already quoted flash disks that don't have moving parts. However it can also be observed here, especially when data smaller than page size is written.

The LFS is based on the following concepts:

The concepts above can be resumed in the following images: 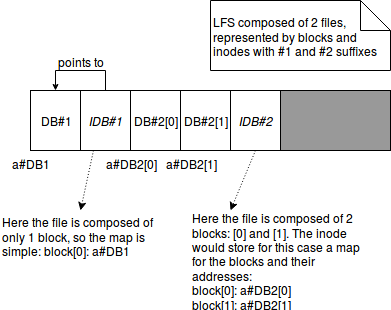 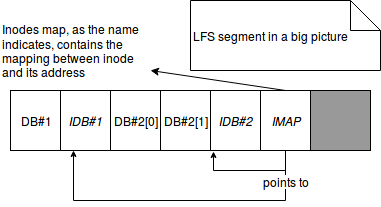 It's a data structure describing a directory or file in Unix-style file system. It contains some metadata (as time of last change, owner or permissions) and disk block(s) location(s).

In Ubuntu the stats about inodes can be retrieved with df -i command and a simple output can look like:

The LFS sounds familiar ? Yes, the similar concept is used in Big Data systems such as Apache Kafka. As explained in the introduction to Apache Kafka, it's an append-only log system. We retrieve some of LFS important concepts: data buffering in memory and sequence writes to persistent log file. LFS concept can also be found in Cassandra, especially through commitlog directory.

A simplified version of log-structured file system is implemented in the below snippet:

This post shown how sequential writes can be used in the construction of log-based systems. In the first section we could discover the main reasons behind sequential writes performance: no time spent on seeks and easier I/O operations based on blocks. The second section introduced a system built on sequential writes - log-structured file system. We could learn its main concepts, such as: segments, append-only character, imap or garbage collection. The last part shown a simple implementation of some of these concepts in object-oriented Scala code.