One of important characteristics of distributed graph processing which makes it different from classical Map/Reduce approach is the iterative nature of many algorithms. Pregel is one of the computation models that supports such kind of processing very well, while Apache Spark GraphX comes with its own Pregel implementation.

Pregel is one of the most popular implementation of vertex-centric graph processing. If you're interested in more details, I recommend reading the linked post. The most important concepts of the following approach is the fact that:

GraphX provides an implementation of such processing that it's different from the original one. Unlike the initial Pregel API specification, GraphX's one lets the exchanged messages access the attributes of both - source and destination - vertices. In addition to that, GraphX uses a reduce approach, i.e. it doesn't need to wait for all messages to be received by each vertex to begin the computation of its new value. Instead it computes them partially on each partition and merges into the final value at the end.

The Pregel computation on GraphX applies to the triplet and we can see that every time when the new set of messages is computed:

A quick analysis of org.apache.spark.graphx.Pregel shows the presence of a feature already discussed in the GraphX and fault-tolerance . As the name suggests, PeriodicGraphCheckpointer checkpoints the computed graph periodically. It was created because of the initial lack of support for long lineage chains created by iterative algorithms. In this context the RDDs are created very often after dozens or even hundreds of iterations that sometimes led to StackOverflowExceptions.

The execution flow of Pregel-based GraphX program can be summarized in the following big picture schema:

In the picture you can see that the iteration is composed of 2 major steps. The former one consists on calling Graph's joinVertices[U: ClassTag](table: RDD[(VertexId, U)])(mapFunc: (VertexId, VD, U) => VD) which applies mapFunc for every vertices pair present in both RDDs. If the vertex is not present in the joined RDD, it keeps its old value. The role of this processing block is to compute new value of the vertex with the messages aggregated in the previous iteration.

Another block requires a little bit more detailed analysis. It can be divided into the following subblocks: 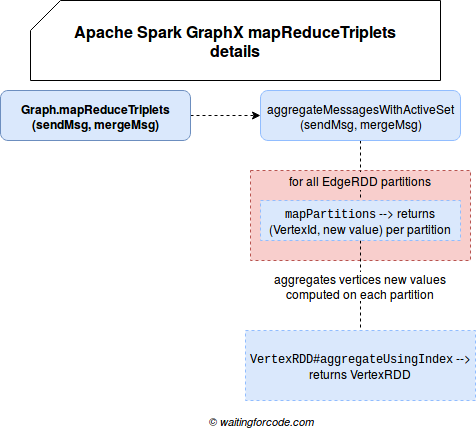 The exchange of messages is a little bit more complicated than the computation of new values in vertices. It delegates the computation to aggregateMessagesWithActiveSet[A: ClassTag](sendMsg: EdgeContext[VD, ED, A] => Unit, mergeMsg: (A, A) => A, tripletFields: TripletFields, activeSetOpt: Option[(VertexRDD[_], EdgeDirection)]) method which, as you can see, takes some interesting parameters:

The whole iteration of GraphX Pregel proceeds as follows:

To see GraphX's Pregel in action we'll use the following graph structure:

As you can see, the tested graph is quite simple. So is the processing functions:

The functions concatenate the values of adjacent neighbors. The value of each vertex will be the path to that vertex from the root (vertex with id 4). Let's start by checking the stop conditions with the maximal number of iterations or inactive vertices:

Even though the results are correct right now, the tests weren't easy because initially I ignored the direction parameter (EdgeDirection.In). And in fact it's the key to detect whether a vertex can be still an active member of the iteration or not. The EdgeDIrection.In value means that only the vertices which received a message in previous iteration are still active. It fits pretty fine in path-reconstruction test. But the "in" direction is not the single one. Its opposite is "out", and 2 more constrained are EdgeDirection.Either and EdgeDirection.Both:

Even though the direction doesn't impact the final results in our case, it impacts the performance of the processing. As you can see in above 2 test cases, the number of iterations is much bigger for the edges whose one of vertices received a message.

Apache GraphX implements Pregel-based iterative computation with some extra changes. The most important one is the checkpoint mechanism that avoids StackOverflow exceptions. The implementation also provides bigger parallelism through partial aggregations at partitions levels. It also has a possibility to configure the criterion for active vertices with the direction parameter. As we saw in the 3rd section, this parameter impacts the number of iterations, that is why, if used inappropriately, it can slow down the whole processing.

Another #ApacheSpark #GraphX feature not covered yet were the iterative algorithms with Pregel programming model. Today's post explains them https://t.co/94pXr3akYa