Graph data processing, even though seems to be less popular than streaming or files processing, is an important member of data-oriented systems. And as its "colleagues", it also has some different processing logics. The first described in this blog is called vertex-centric.

The first section of this post explains the main ideas behind vertex-centric processing. The next one explores them more in details while the subsequent one talks about its important computational models. The final part gives an example of vertex-centric program written with Apache Flink's library called Gelly.

This computational model works in master-slave architecture where the master node is responsible for: slave workers, execution monitoring, coordination and eventually synchronization, if used, among the workers. Sometimes it may be in charge of graph partitioning and partitions distribution. Workers in their turn are the executors of the processing logic on the vertices assigned to them by the master.

Technically the processing logic applies on a vertex level. Theoretically, each vertex can contact any other vertex in the graph. To do that it must only know the id of the targeted object. In practice, this choice is often limited to the nearest neighbors of the vertex because of much smaller complexity. Once applied, the processing logic can change vertex state. If it happens, the new state can be sent to other vertices as a message. Messages exchange occurs in an iteration called superstep. In each of them, the vertex can access only to the message from the previous superstep. The iteration terminates when all active vertices were called.

In "Thinking Like a Vertex: A Survey of Vertex-Centric Frameworks for Large-Scale Distributed Graph Processing" paper (link in "Read also" section) the authors propose 4 main pillars of vertex-centric graph processing:

The key point of vertex-centric program is the a user-defined function specifying processing applied on each vertex. Usually, the function takes as parameters: vertex data, data of adjacent vertices and incoming edges. Its result can be propagated across outgoing edges to neighboring vertices. The function executes on each vertex as long as the latter remains in the active state. When all vertices become inactive or, as told, some threshold or the number of desired executions was reached, the computation terminates.

Usually the fault tolerance is provided with checkpointing. The graph is copied to some persistent storage (e.g. DFS) and in case of failure, it rollbacks to the most recent persisted state. The processing restarts from that point. But the checkpointing is not a single fault tolerance mechanism. The other systems can be based on the implementation framework. As an example we can take Apache Spark GraphX that uses Apache Spark's ability to lineage recovery from defined operations.

The computational models are divided regarding their number of phases. The simplest model is called single phase and it represents the initial implementation of vertex-centric programs. In this case, the user-defined function does 3 things: accesses input data, computes a new value for the vertex and propagates the update to the rest of vertices by iterating over vertex outgoing edges. This method is easy to implement and was chosen for the first vertex-centric implementation - Google's Pregel. This framework uses the ideas from Bulk Synchronous Parallel (BSP), such as supersteps (BSP's components), network communication for messaging and synchronization barrier. Unlike classical BSP approach, Pregel introduces the state of vertices. In each superstep a vertex can be active or inactive. And this state is one of the halt conditions - when all vertices are inactive, the program stops.

Another execution model is two-phase model also called Scatter-Gather. This second name gives a lot of information about the 2 phases. The first one called scatter distributes the value of given vertex to its outgoing edges. The second stage, gather, collects the input message and applies it to the user-defined function. As a result of this operation, a vertex may update its local value and trigger scatter stage to send it to other vertices. This approach is met very often in the vertex-centric systems reading/writing data to/from edges. Among the implementations of Scatter-Gather, we can find one that lets the user define 2 processing functions. One of them is executed on each vertex in active subset. Another one applies on all outgoing edges in this subset. In this context, the subset is a view of the graph stored in a given partition.

The last execution model is three-phase model also known as Gather-Apply-Scatter. Sometimes another, extended, name is used: Gather-Sum-Apply-Scatter. One of its famous implementations is Apache Spark GraphX. As for the previous model, its logic is also defined in the second name. The execution consists of 3 steps. The first one, gather, an user-defined function is applied to each of adjacent edges for all vertices. The edge stores the values for edge's source and destination vertices. Later these values are passed to another function that reduces them into a single value, like in Map/Reduce. This operation corresponds to the sum stage in the 3rd used name that is sometimes omitted and included directly in gather. The result of this aggregation is sent to another data processing function executed in the apply phase. Here the result of the function sets a new vertex state. Finally, in scatter phase, another function executes for all edges that know the new values for source and destination vertices. In some implementations scatter phase is omitted. For instance, it's the case of Gelly that defines one of its computation models as Gather-Sum-Apply.

To see vertex-centric examples we'll use Apache Flink graph library called Gelly. It provides pretty clear interface for all of 3 listed execution models. But before showing the code, let's discover the tested graph: 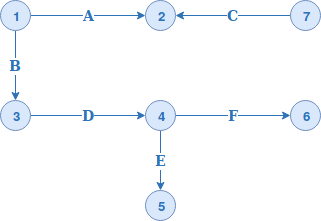 The single phase model in Gelly can be implemented as:

The following table summarizes the execution steps for a single phase processing:

Two phase model decouples the logic of accumulate values from the one of updating them:

And in summary it gives:

Finally, the model based on 3 steps adds a combiner stage:

And in summary it gives:

This post presented vertex-centric graph processing. As the name suggests, it's based on iterative execution of the user-defined functions of partitioned vertices. Most often the updated data is sent through messages but, as explained in the 4-pillars list, it's also possible to use shared memory. The execution is synchronous, with a synchronization barrier at the end of each iteration called superstep. However, an asynchronous version exists. It's more difficult to implement though. The vertex-centric concept can be made with one of 3 execution models: 1 phase, 2 phases and 3 phases. They differentiate by the number of user-defined functions. In the former, only 1 function is defined. It does both: sending messages and updating vertex value. Two other versions use more functions, as I presented that in the last section with a traversal-like example and more random-access one.

Another today’s post about #graph published on waitingforcode. It introduces the first data processing model called “Think Like a Vertex” and shows some simple examples written with #ApacheFlink #Gelly library: https://t.co/Y7bEMqdb7h